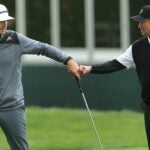 Dustin Johnson and Wayne Gretzky walk down the fairway at the 2014 AT&T Pebble Beach Pro-Am.

When Wayne Gretzky speaks, you listen. The NHL’s all-time leading scorer is the future father-in-law of World No. 1 Dustin Johnson, who is trying to close out the 84th Masters today and win his second career major title.

And while Gretzky might not be giving Johnson swing tips or putting drills to test out, The Great One knows plenty about winning at a high level and what it takes to get there. So, on that note, what kind of advice would he have for Johnson?

“I’ve told Dustin he has to be more like Tiger,” said Gretzky, speaking to GOLF senior writer Alan Shipnuck for a 2016 GOLF Magazine profile on Johnson. “I don’t mean he has to be Tiger — you only get a few athletes like that a century. But part of what made Tiger Tiger was relentlessness.”

Johnson, after several close calls, finally won his first major at the 2016 U.S. Open at Oakmont, and he won his very next start at the WGC-Bridgestone Invitational. He closed that year with a win at the BMW Championship and won PGA Tour Player of the Year.

“If I scored 50 goals in a season, I wanted 70 the next year. If I got 70, I wanted 90. Never, ever settle,” Gretzky said. “Dustin just won three tournaments and a major. That’s a great year. Now go win five tournaments and two majors. I want him to see that only he can put limits on himself.”

Johnson listened. A couple of months after the GOLF Magazine article was published, he won three straight starts (two of them WGCs) from February to March. He was a heavy Masters favorite until a fluke accident kept him out of the event.

The World No. 1 — who has held that top spot for several different stints and for more than 100 total weeks — now has 23 career PGA Tour wins. On Sunday, he has a chance for his biggest win yet.