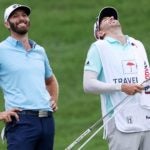 Dustin and Austin Johnson have teamed up on the links since 2013.

Dustin Johnson held the 54-hole lead at the 2020 PGA Championship, and his low round of the week, a 65 on Saturday, came without the aid of one important item: his yardage book with all of his notes.

“It’s got to be in the bottom of my bag,” Johnson said after his round. “But I didn’t want to take all my clubs out on the golf course. But AJ had an extra one, so we were fine.”

“Just to be clear, he had an extra one from this golf course, though, right?” a reporter asked.

The Johnson brothers have teamed up on the course since 2013, and their endearing carefree attitudes — and questionable math skills — are well-known and beloved on Tour. Here are some of the best stories (that we know of) about golf’s ultimate brother/caddie duo: Dustin and Austin (also called AJ) Johnson.

Our Alan Shipnuck profiled the Johnson brothers for a 2017 GOLF Magazine piece, in which he detailed some of the brothers’ greatest hits. A couple of them came during the 2016 Ryder Cup at Hazeltine in Minnesota.

In one match, Dustin faced a mid-range putt with two or three feet of right-to-left break, but after speaking with AJ he started the putt a yard left of the hole. He missed by six feet.

“Awwwww, man,” Dustin said. “I had the [green-reading] book upside down.”

During that same Ryder Cup, Johnson and Matt Kuchar played Europe’s Thomas Pieters and Lee Westwood in foursomes (alternate shot) one day. On the 6th hole, a par-5, Kuchar drove it into the rough and then walked to the layup area in the fairway, where Johnson was supposed to hit it to. But the brothers spent an alarming amount of time scanning their yardage book. When Johnson finally hit, he left it much shorter than where Kuchar and caddie John Wood were standing. Kuchar hit a 7-iron when he was looking to hit something like a wedge.

“We weren’t sure we had the right [sprinkler] head,” Austin told Kuchar and Wood, according to Shipnuck.

“With anybody else, that could have created a lot of tension,” Wood said. “With those guys it was like, Hey, no big deal. We were still in the fairway, Kooch knocked his shot on the green, and we halved the hole. That put a thought in my head I haven’t forgotten: Why get so worked up over something that has already happened, ya know? Those two never sweat the small stuff.”

The Rules of Golf received a makeover in 2019, so they were a major topic when the first event of 2019, the Sentry Tournament of Champions, rolled around on the calendar in January.

Dustin was asked in his pre-tournament press conference if he or Austin had a chance to study up on any of the changes.

“I actually just looked at it for like a minute upstairs before I came down,” he said. “They’ve got a big poster in the locker room.”

“I had one of the Tour officials do a printout that I’m going to give to him to study later on today,” he said. A reporter followed up, asking how that would play out.

In another Shipnuck profile, after Johnson won the 2016 U.S. Open at Oakmont, he relayed a story from Billy Horschel.

The 16th at Doral is a drivable par-4, and when Horschel was playing with the brothers he noticed they couldn’t track down the exact yardage to the green. Finally, Dustin said, “Bro, you wanna hit?” Eventually Dustin hit, too, finding the green.

“Walking off the tee, [Dustin’s] like, ‘Bro, A.J. does not know how to add; he can’t do numbers,'” Horschel recalled.

Whistling Straits in Wisconsin has hosted the 2004, 2010 and 2015 PGA Championships — Dustin was top 10 in the last two, losing in heartbreaking fashion in 2010 — and that gorgeous links-style layout weaves along the coast of Lake Michigan. One story, however, is that Dustin convinced Austin it was “Lake Canada.”