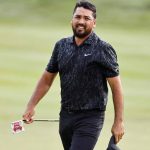 Despite being just one stroke back at the Travelers Championship, Jason Day might not be 100 percent healthy.

Anyone who calls golf a good walk spoiled might reconsider after watching Jason Day during Saturday’s third round at the Travelers Championship. The walking part did not look easy.

Dogged by injuries throughout much of his career, the 32-year-old Aussie moved gingerly around the grounds of TPC River Highlands, striding slowly, bending carefully to plant his tee and removing his ball from the cup in the creaky-looking manner of a man twice his age.

Once again, Day’s pesky back was the issue.

The good news is that the problem was reported to be relatively mild muscle tightness—relative, that is, for a guy who has battled back problems for years and who earlier this month was forced to withdraw from the Memorial, his second WD of 2020-2021 season.

If the walking part looked tough, Day made the swinging part looked fairly easy, albeit with a modified back-sparing action. To safeguard himself from further aggravation, Day has taken to swinging his arms faster while rotating his body slower than he did in the past, a change easily noticeable to those who follow the PGA Tour. Even an armchair instructor could see that Day was hanging back slightly on his trail foot.

Not that the change did much to sap his power, as Day routinely kept up with, and several times out-drove, his long-hitting playing partner, Bubba Watson.

Long known for his deft short game (he led the Tour last year in strokes-gained around the green), Day had his touch intact as well. That point was underscored on the par-3 16th, where he pulled off a brilliant bump-and-run with a 3-wood from an awkward lie in a collection area behind the green, nestling the ball to within inches for a Houdini up-and-down.

As if a bothersome back weren’t enough, allergies also seemed to addle Day, who coughed and sneezed his way through the closing stretch, a consequence, perhaps, of wind-whipped pollen. Get that man some Claritin to go with his Aleve.

Whether Day can keep it going amid his discomforts remains to be seen. Back problems are stubborn, and for all his preventative measures, Day did not escape the day pain-free. On the 18th hole, after an awkward lash with his driver, Day reached down to grab his right glute. His tee shot settled near the lip of a fairway bunker, forcing him to layup on the par-4. A wedge for this third shot and two putts later gave Day a closing bogey, dropping him one stroke out the lead.

He’ll tee off on Sunday in the second-to-last group with his Down Under countryman Cameron Smith, maybe not in peak physical condition but still very much in the mix.

Winning has been known to cure all kinds of pain.