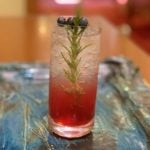 CordeValle's light and bright libation is called a Blueberry Breeze.

The Bay Area is a region of microclimates. If you don’t like the weather, drive a little ways and it’s bound to change.

At the PGA Championship this week, players with early starting times at TPC Harding Park, in San Francisco, can plan on contending with foggy conditions, a signature feature of summer mornings on the western fringes of the city.

About an hour south of Harding Park, though, along the lower lip of the Silicon Valley, sunshine is the order of the day, as you see when you play a round at Rosewood CordeValle.

The luxury resort (one of GOLF’s Top 100 in North America) in the verdant foothills of sleepy San Martin, is home to a Robert Trent Jones Jr.-designed course with a championship pedigree of its own; a former host of the Frys.com Open on the PGA Tour, it also staged the 2016 U.S. Women’s Open, an event contested under sun-splashed skies. So it goes in this temperate swatch of Northern California: summer feels very much like, well, summer. That’s true both on and off the course.

At the One Iron Bar, one of CordeValle’s lively post-round hangouts, bartenders pour a range of warm-weather cocktails, none more refreshing than the Blueberry Breeze. Its base is a medley of blueberry syrup, lemon juice and Skyy Vodka, shaken and strained into an ice-filled glass, then topped off with club soda. The final flourish is a sprig of rosemary, propped into the glass as an aromatic garnish, with fresh blueberries suspended in its spindly leaves.

In foggy San Francisco this week, the preferred post-round drink might be a hot toddy. But at CordeValle, look for a lighter, brighter libation, with the berry-blue color of a sunny morning sky.