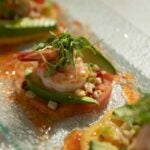 To everything a season, including the ANA Inspiration, one of the five majors in women’s golf. Born in 1972 as the Dinah Shore, and known more recently as the Kraft Nabisco Championship, the tournament has long been a fixture of spring, held annually in late March or April. This year, though, with schedules set akimbo, the ANA has a new start date in a different season. It gets underway on Thursday, at Mission Hills Country Club, in Rancho Mirage, California.

Late summer in the desert is a searing time of year, with temperatures reaching into the triple digits. You know what else is peaking? The seasonal flavors of heirloom tomatoes and corn. Both ingredients are on shining display just down the road from Rancho Mirage, at Andalusia Country Club, in La Quinta, a private residential redoubt that boasts the only Rees Jones-designed course in the Coachella Valley.

Here, executive chef Aaron Marshall prepares a dish he calls the Shrimp Stack, a bright, layered medley of corn, tomatoes and fresh shellfish that’s perfectly suited to the heat. Chef Marshall dreamed up the recipe a few years back, while hanging out at home on a warm summer day. He wanted something light for lunch, free of starch and dairy but packed with vibrant flavors.

Beat the heat with cool apparel The combo he created stars sweet, poached shrimp, perched on a salad of grilled, chilled corn and thick-sliced, locally grown tomatoes. Diced red and green peppers add color and crunch, while fresh avocados lend buttery richness. The dish is dressed and seasoned with olive oil, salt and pepper, with micro-cilantro as an attractive garnish and splashes of chili sauce on the side. The Shrimp Stack makes a sweet choice as a starter, or as a satisfying lunch that won’t make you feel as you’ve overeaten before you light out for a round of mid-summer golf — or tune into a major on TV.