Clubhouse Eats: The pork chop at Reynolds Lake Oconee’s National Tavern is so tender you can cut it with a fork 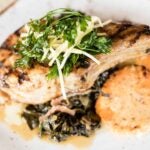 The National Tavern's pork chop is fired to perfection in a wood-burning oven that cranks to 700 degrees.

This Monday, in Atlanta, it will all be settled. When the final putt drops at the Tour Championship at East Lake Golf Club, we will have a winner of the 2020 FedEx Cup Playoffs. That’s $15 million to one very happy golfer, and a comforting sense of closure for the rest of us in what has been an otherwise uncertain year.

As long as we’re talking about clarity, here’s something else in Georgia that’s already been decided. About an hour east of Atlanta, at Reynolds Lake Oconee, surveys have been conducted asking guests to name their favorite meal at the luxury resort. With the ballots counted, the winner, in a landslide, is the pork chop at the National Tavern.

As its name suggests, the tavern is a lively, relaxed redoubt that serves farm-fresh iterations of traditional favorites, from Southern fried chicken with honey-mustard dipping sauce to a Low Country boil, starring shrimp, andouille sausage and corn on the cob.

But nothing keeps the kitchen busier than the pork chop orders, which come in fast and furious, night after night. What makes it so special? For starters, this is richly marbled meat, like the pork equivalent of Kobe beef. And it’s fired to perfection in a wood-burning oven that cranks to 700 degrees, so the chop sears quickly and stays juicy, its flavors sealed, its texture is so tender you can cut it with a fork. No need for a knife. As a compliment to this delicious cut, the pork chop comes with a baked potato and a side of creamed corn, a double-dose of starchy satisfaction.

Who will win at East Lake? That’s to be determined.

But as for what you’ll want to eat at Lake Oconee, there’s no doubt.