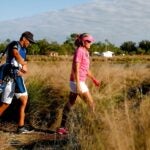 Things will look different next week at the ANA Inspiration as caddies will be allowed to ride in carts.

The second women’s major of 2020 is going to look a lot different than the first.

For starters, we’ll be in southern California at the ANA Inspiration, a lengthy jaunt from the Women’s British Open at Royal Troon. And because of that extreme difference in climate, we’ll see some caddies riding golf carts in the torrid desert heat.

Players and caddies in the field at Mission Hills Country Club received a memo Thursday saying, “Projected temperatures next week will range from 105-115 and we are very conscious of the high heat. 2020 has been the year of health and safety, and with that in mind, we will be allowing caddies to take carts for the week.”

Not only does that mean push carts that players can walk behind, but also powered carts players can ride in.

A brutal heat wave is expected to sweep through the area beginning this weekend that could see record-high temperatures for September. The ANA Inspiration is normally held in late March or early April, when heat waves mean something completely different.

“We have consulted with our medical team and feel this is the best decision to keep our caddies safe and healthy during this extreme heat,” LPGA Chief Tour Operations Officer Heather Daly-Donofrio said.

The rule is not mandatory, but applies to caddies only — not players. And as Beth Ann Nichols reported for GolfWeek, don’t expect all caddies to take up the LPGA’s offer. According to LPGA.com, other pre-cautions have been addressed as well, like caddie bibs instead of jumpsuits and extra cooling towels for all people on-site.