Craving golf today more than ever? Welcome to the club 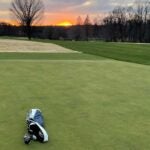 The pull of golf has been particularly strong in this trying year, whether that's with a fivesome or during a solo round.

We’re making up for lost time. Right? We — brothers and sisters throughout golfdom — lost the second half of March, all of April, a chunk of May. We all know why. And now it’s December, normally golf’s darkest month, yet ye olde game is in full swing. Tee sheets are crowded, club sales are booming and golf-heads in city and burgh are consulting their local listings for this televised event and that one.

My Wednesday game was a fivesome and I am one who used to think three is one too many. (Broadly, really, I still do.) Forty-five degrees and windy and the ball was going nowhere, but did we care? Not if you’re on a golf bender. My Thursday night game was solo golfer, nine-hole course. See snap above.

We’re on one, with two majors still to come before we close out this rotten year. First up is the U.S. Open (not its official name), to be played next week at Champions Golf Club, in Houston. Here comes Jeongeun Lee6, the defending champion. Here comes Maria Fassi, with all that young promise. Here comes Stacy Lewis, with all that back-nine poise. The event began in ’46 and its been played each year ever since. This year’s edition is No. 75. Mickey Wright, who died this year, won it four times. Annika Sorenstam won it thrice. Patty Sheehan won it twice. Michelle Wie won it once. And — this may surprise you — Kathy Whitworth never won it at all. She’s not complaining, what with her 88 other LPGA wins. Eighty-eight! There’s something poignant and beautiful, about the high-shelf things we do not get.

The other major this month is the Father, Son and Others event (not its official name), held in mid-December in Orlando. There we will get to see the progress of one of the most exciting young talents in the country. We speak, of course, of Little John Daly, son of JD his own self.

Annika is playing with her father, Tom. Justin Thomas is playing with his, Mike. Justin is calling this event his fifth major, and his father’s first. Mike Thomas’s father made the cut in the 1960 PGA. His son won it in 2017. The December event — the PNC Championship — will have no spectators this year but will almost certainly get better TV ratings than it ever has before. Eleven-year-old Charlie Woods is playing in it, beside his dad. His father has been a Jeopardy! answer at least 84 times, and it’s not just because of his 82 PGA Tour wins. Sam Snead is sitting on that number for eternity, unless accounting gets a hold of his total again.

I’ve had a couple terrific conversations with Kathy Whitworth in recent weeks, for a longer piece for next year, and I’ve been stunned to realize how little I have known about her. Late in her career, she told me, there were often sports-section sidebars about how her career total compared to Snead’s. She and Snead were buddies. The organizers of a mixed-team event, 20 years ago, paired Kathy with Sam’s nephew, J.C. The best thing about that, Kathy told me, was that she won enough money to buy a Lexus she wanted. She drove that car for years. She’s like a lot of Texans. She likes to drive.

Ms. Whitworth, 81 on her last birthday, lives outside Dallas and she’ll watch the women at Champions, via the magic of color TV, with keen interest. She roots for Tiger though she has never met him. They were both at the 2002 Memorial Tournament, Tiger as the defending champion, Kathy as a tournament honoree. “I would have liked to have met him, but it would have been just been hello, how are you, and then we’re down the road,” Kathy said

Her modesty is stunning. I don’t know what Tiger would have been like, in the presence of Kathy Whitworth in 2002. But I’m pretty sure now he would relish the chance to meet her and compare notes, on contending, on winning, on practicing, on plotting. Tiger likes older people. His father, born in 1932, was almost 44 years older than he. Tiger is 44 now.

Regular readers of this space will recognize the name Fred Anton, one of my great friends, who died several years ago at age 83. I logged more rounds with Fred than anybody else, and Fred’s understanding of golf, and life, was, to me, profound. Also, he was a golf bum. (High praise.) If I called Fred for golf on a Thursday night, looking for a Friday game, Fred didn’t even bother with yes. This was faster: “Where and when?”

This year I have likely played more holes of golf than in any other. (The silver lining of a rotten year.) I have always liked and loved to play, but the game has never meant more to me than it does now, which is saying something. The other day I heard from a friend, another lifer named Jim Axelrod, who was saying the exact same thing. He’s never played more and he’s never played better. As Jim noted, if you’re playing a lot, you don’t attach so much meaning to one bad shot or one bad hole or one bad round. You know you’re going to get another chance pretty soon. Like tomorrow. Forecast be damned.

I bring this up because it was only recently, like this month, that I had an insight into Fred and his golf. It’s not just that he liked or loved to play. He needed to play. That’s how I feel right now. I need to play. I need the fresh air. The camaraderie. The challenge. The walk. The effort. The escape. I like the feeling that comes with being a member in good standing of the tribe of golfers, on the same long roll that lists Old Tom Morris and Kathy Whitworth and Little John Daly.

I knew nothing about Tony Hsieh, the former CEO of Zappos, before his death in a house fire late last month. He was 46 and he had no interest in the trappings of wealth. He was not, as far as I know, a golfer. But Butch Harmon, a Las Vegan like Hsieh, noted his death with sorrow. He knows all Hsieh did for their adopted city.

Mr. Hsieh’s obituary in the New York Times included a telling quote from a magazine profile. It is cited here for its broad, deep meaning and also because many of us, in the tribe of golf, will know immediately how to apply it to ye olde game:

“Most of the frameworks for happiness conclude that there are four things required: perceived control, perceived progress, connectedness (meaning the depths of relationships) and being part of something bigger than yourself.”