10 surprising winners from The Match 3 (besides Phil and Barkley) 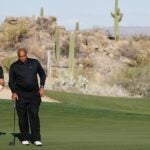 Charles Barkley and Phil Mickelson won the Match 3 — but there were a few other winners, too.

That’s a wrap on The Match 3! A compelling matchup made for some delightful post-Thanksgiving television. Eventually, the match itself got out of hand, but while it was going, there was plenty of good stuff to take in. Besides the team of Barkley and Mickelson, here are 10 winners from Friday’s action:

This was the first in this Match series without Tiger Woods, and while we certainly missed the gravitas of the world’s most famous golfer, this was a chance for Mickelson to go full Phil. He seized the opportunity.

It’s hard to narrow it down to one or two things Mickelson did, so let’s buzz through them: He served as Barkley’s sensei. He hawked his “Coffee for Wellness” brand. He nearly called his shot on a must-make hole-in-one. He dropped the line, “I loved this club so much, I bought it!” And he channeled all that attention and energy into some truly impressive play, all while coaching his once-hopeless partner to respectability.

It’s okay to admit that you liked Mickelson’s role. It’s also okay to say that you’re mystified by him. There’s an element of ridiculousness to a guy who can take his partner’s meaningless putt for double-bogey 6 so seriously when it comes in the middle of the back nine of an exhibition match. But that’s exactly the sort of thing you need to glue this place together. Mickelson was brash, he was strange, he was funny and he bought all the way in. All he needed was someone to counter that energy on the other side.

Perhaps Mickelson’s greatest accomplishment was helping Charles Barkley play respectable golf in front of millions of viewers on TV. Remember, this is a guy who is famous for his inability to swing actually through a golf ball. But we didn’t see Barkley’s hitch a single time all Friday.

Of course, Barkley is the one who truly deserves credit for overcoming a massive obstacle, both mentally and physically. When he striped his opening tee shot, he looked so happy and relieved that it was impossible not to be happy for him. Barkley’s inability to play golf was, in some ways, the selling point for this edition of the Match. To his credit, he actually got so good that the storyline never quite bore out.

This one didn’t quite pan out, but for a while it looked like it would: Steph Curry has the potential to be a perfect foil for Mickelson. He’s confident, he smokes the golf ball, he’s good, he likes to talk some trash and he’s unquestionably slightly worse than Mickelson. But Curry can only fill that role if he’s playing to his potential. We know that he’s got serious game — we’ve seen him shoot 71 in a professional event, after all — but Curry didn’t bring his best stuff on Friday, and as a result Mickelson looked miles better than his +1-handicapped opponent.

In other words, Curry was fun, and he showed flashes of fire, but he gave us just enough to leave us wanting more. Here’s hoping he gets another chance.

The format was a big-time winner here. If there’s one thing we learned from The Match 2, it was just how much better the action got when every shot counted. Moreoever, alternate shot acts as a multiplier. There’s the normal tension of a best-ball match, and that gets amplified when you suddenly have to count every shot, and it gets amplified again when you have to play your partner’s golf ball.

You could see Manning and Curry struggle with the format, and that’s easy to understand — it’s harder to get comfortable when you don’t get in the rhythm of playing your own ball. The format also made it more fun watching Mickelson work his mental magic on Barkley. The choice of two tee shots added strategy; alternate shot the rest of the way added tension.

Nobody is going to mistake The Match for the U.S. Open, which means it’s more than okay that the host sites don’t look much like Winged Foot or Oakmont. Let’s go one step further: that’s appropriate! For a contrived match-play exhibition, maybe it makes sense to show some outrageous elevated tee shots from a small rock tower gazing over an expanse of cacti in the afternoon sunshine. Maybe every Match course should look like it’s ripped from a Golden Tee screen. If we’re gonna do different, let’s do different.

At first, you’d think golf carts would be a bad idea. They’re not. In addition to satisfying social distancing requirements, the carts allow for some interaction with the broadcast booth. They eliminate the awkward tee-to-ball walks that we loathed from The Match 1.0. And they ensured that the match actually finished while there was still sun in the sky — although if they’d had to play 18, they’d have been putting with iPhone flashlights on.

The rest of this is very literally fun and games, but as the broadcast wrapped up, TNT flashed an infographic with the good stuff: $5.45 million in donations to HBCUs. Between Steph Curry’s contributions to Howard, Augusta National’s commitment to Paine College, Cameron Champ’s announcement last week and The Match’s contributions, it’s great to see golf recognizing its ability to effect positive change.

On a basic level, we like watching these matches because we like seeing these guys be themselves on a golf course. Each match has gotten progressively better at this relaxed vibe, and the mic’d-up players are our gateway into their conversations, their interactions and their reactions. The microphones allow us to hear every priceless Mickelson one-liner, every Mickelson short game tip and every Mickelson shameless plug. This is supposed to be different from the 72-hole stroke play tournaments we know and love; we shouldn’t forget that mic’d up players are a big differentiator.

Would you cancel your plans on a Friday evening in mid-July to watch these four duke it out on the course? Perhaps not. But when you’re getting ready to plow through some Thanksgiving leftovers, doze off for a hole or two and make casual conversation with your family, this may be the very best day on the entire calendar for The Match to thrive.

If there was a mistake from the first Match, it was taking itself too seriously. Tiger vs. Phil presented itself as gripping, nonstop action and entertainment. There was no way it was going to match the boxing-style run-up. The Match 3 settled delightfully into golf’s sweet spot, where you can zone in for tense moments, tune out when you need to and get as much out of it as you want to.

Yes, there are things I’d love to change, and maybe that deserves another column (in no particular order, I’d love a more competitive match, less emphasis on pie-in-the-sky hole-in-one challenges, better challenges, period, an engaging LPGA competitor, better play from Steph Curry and slightly fewer naked product plugs, among other things — and yes, I know some of those are impossible to control). But The Match 3 delivered. It suggested that these will work without Tiger Woods. It didn’t seek to change sports or even change golf, but it succeeded in showing us the game in a slightly different format.

For that, we can all be thankful — and eagerly await the matchup that comes next.

Gear up for your next round!