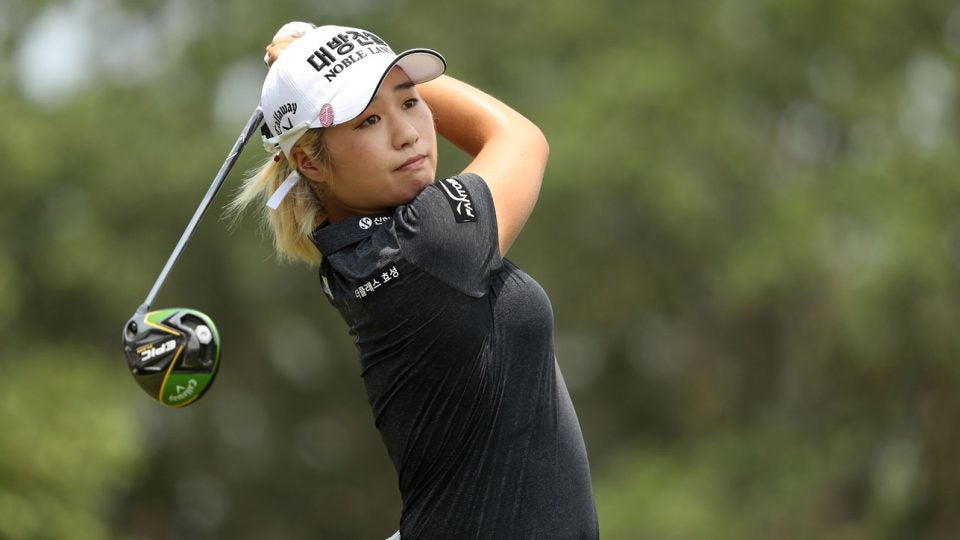 Lexi Thompson, Angel Yin and So Yeon Ryu tied for second at four under.

Lee6 began her final lap around the Country Club of Charleston two groups ahead of the final pairing. Though she’s an unfamiliar name in America, Lee6 has serious competitive chops, with six victories on the Korean LPGA Tour since 2017. In her two previous U.S. Women’s Open appearances in 2017 and 2018, she finished T5 and T17, respectively.

Lee6 plays primarily on the Korean LPGA Tour, and the “6” is her name is used to differentiate her from the five other players on the KLPGA with her exact name. She’s since embraced the designation has worn clothing branded with her nickname, “Lucky 6.”

It was an impressive performance to say the least. Lee6 triumphed while her peers wilted around her. The action began with third-round leaders and former Duke teammates Celine Boutier and Yu Liu dropping shots on the opening hole, creating an opening for the players ahead of them. Just like that, it was game on.

Two players who began their final rounds with the lead seemingly out of reach — Gerina Piller and Angel Yin, seven and six shots back, respectively — found themselves in contention on the back nine.

Piller, who has only played in eight competitive events since November 2017 after taking the entirety of 2018 off to have her baby, was five under par on the day through 12 holes, and was tied for the lead by the time she reached the 13th hole at five under par overall. But back-to-back bogeys caused her to drop down the leaderboard, where she eventually finished at three under.

Yin has never made the cut in four U.S. Women’s Open appearances, but posted a 68 in the final round — one of the lowest rounds of the day on Sunday — to become the championship’s clubhouse leader for a short while at four under par.

News
At the U.S. Women’s Open, players refuse to let Haney’s dismissive comments get them down

Thompson, a fan-favorite and the top-ranked American, was six under and one behind the leaders when she teed off on Sunday but made three bogeys in her opening four holes. While she rallied with birdies on Nos. 7 and 9 to get back within one shot of the lead, a bogey on the treacherous par-3 11th proved too much to overcome.

The par-3 11th was a place where many players saw their U.S. Women’s Open dreams dissipate, but for champion Jeongeun Lee6, it was where she took control. Only three birdies were made on No. 11 on Sunday, and Lee6 claimed one of them. She also birdied the par-4 12th to pull away from the field and extend her lead to two shots over Jaye Marie Green.

Speaking of Green, she too had her hat in the ring throughout her front nine, beginning her final round only one shot back and co-leading for a short while, but the 25-year-old American’s momentum fizzled with bogeys on Nos. 12 and 14. She ended up with a 74 on Sunday to finish T-5.

Lee6 got to eight under but made bogeys on 16 and 18 and took the clubhouse lead at six under. Boutier had the final chance to catch her with a birdie on 18, but her approach went into the bunker and she made double bogey.