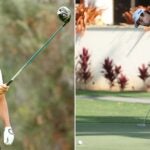 Kevin Na and Joaquin Niemann were both impressive at last week's Sony Open.

Hawaii Five-O, surely, but it was most definitely Kevin Na 5.0 in Honolulu last week.

The gritty veteran notched his fifth PGA Tour victory, and his fourth in the last four seasons with a come-from-behind win at the Sony Open.

The win was vintage Na. Patient, calculated, gusty, entertaining and grinding as he overtook 54-hole leader, Brendan Steele, Chris Kirk (who had posted) and a hard-charging Joaquin Niemann.

Last year, I wrote about Steele and lessons you could learn from his play at the 2020 Sony Open. This time around I want to share a few lessons from Steele’s final group playing competitors:

If you want to get the lowdown on how Na approaches the game, how he scrambles and putts so well, (and even more importantly, how he beat a case of the driver yips) go check out my “On the Mark” podcast with him.

My take from Honolulu however has nothing to do with those elements. In fact, I want to illustrate how you can hit that pressure tee shot solidly, and in play, when you need to by emulating Na.

To put it in context, he drilled a beauty down the 18th hole in the final round — a solid baby draw that led to a closing birdie to seal the title.

One thing stood about the tee shot swing out to me. — it was a subtle move that was different to every other tee shot he struck.

Na appeared to make a backswing that was a touch more disciplined, measured and complete before he unloaded into contact.

I realize it probably sounds trite but do realize this: Ensuring your backswing is completely wound-up before you unleash is beneficial in many ways.

When you are under the gun, your body is amped up and adrenaline is surging through your system. This ordinarily leads to two things — your senses being heightened, and quicker, more animated movements.

It’s important to be recognize this when it comes to high-pressure swings. Whether you are a naturally hyped-up person like Na or not, your system is firing when under pressure. An unhurried, fully loaded backswing with a complete pivot sets you on a productive path to hitting that quality shot when you need to.

So next time, when you are feeling a little juiced and things are moving fast, emulate Na. Don’t just pay lip service to the smooth and complete backswing, set your mind to it and do it.

If you were paying attention on Sunday, you may have seen Niemann employ a similar pre-putt routine to one employed by both Dustin Johnson and Collin Morikawa.

As he sets up over the ball, he takes his lead (left) palm and places it in the crook of his trail arm (right) elbow.

With marginal pressure, this simple move aligns the forearms, elbows, chest and shoulders and puts you in position to make an on-line, arcing putting stroke.

Furthermore, if you struggle with an arc that tends up and away on the backswing and then downward and inward too much on the delivery, a trail elbow properly situated snug to the torso sets up a more productive stroke that arcs gently inward on the backswing and follow through.

Finally, situating the trail elbow close to the right side and maintaining that relationship promotes a putting stroke that is governed by the body. This arm-and-body relationship eliminates excess and damaging hand and wrist action.

Give it a try. If nothing else you will get yourself into better alignment for a solid stroke.