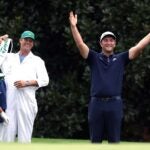 Jon Rahm's skip-shot hole-in-one was the shot of the week.

It’s Masters week — my favorite week of the year. Although it looks, and sounds, a little different, Augusta National is still as majestic as ever, and a number of Masters traditions remain. One of those traditions is the practice-round skipping of golf balls across the pond that fronts and flanks the par-3 16th green.

Year in and year out the 16th hole authors some unbelievable storylines and this year it came through once again. During the Tuesday practice round, Jon Rahm skipped a ball (from about 150 yards) across the water, onto the green and into the hole for an improbable hole-in-one.

It was a lightning strike of biblical proportions and was loudly celebrated by Rahm, Rickie Fowler and their caddies.

While the shot was fun, there is a lot you can learn from a shot that skips across water. It can even improve your ball striking and power up your shot trajectory. Due to the fact that every airborne golf shot is spinning backwards, it is likely that the ball will skim across water if its angle of descent is flat (horizontal) enough. The appropriate angle of descent is the key to making the skip shot happen and learning to control this element can improve a myriad of ball-striking, chipping and pitching factors.

Most players, when attempting the skip-shot at the 16th, will use some sort of long iron like a 4-iron and play the ball off a slight downslope. These factors naturally flatten the trajectory of the shot allow it to skid across the water.

Skipping a golf ball along the water, or in this drill’s case the ground, will almost certainly put you in a powerful impact position — that is, the face squared up, the shaft leaning forward and the face delofted through impact. Further, the body will have to situate correctly to support these positions and the weight shift and pressure transfer will also tighten up.

To drill the skip shot, select a 6-iron (I know it normally requires a straighter faced club but this is a drill to power up the clubface). Set the ball position around the middle of the stance with your hands slightly ahead of the ball and the button placket of your shirt over the ball, or preferably to the target side of the ball. You should feel more pressure on your lead foot than your trail foot.

From there, while maintaining the weight and pressure on your lead foot, and your eyes trained on the very front of the ball, make a practice backswing and hold the position at the top. Sense the rotation of your core, the stretch and extension in your lead arm, and the fact that you have rotated your body away from the target while still maintaining pressure on your lead leg. Incidentally, your eyes should still be on the front of the ball.

Once you have that sense, you are set up for success. The only key is to deliver the club into the ball with your hands in front of the clubhead, your lead arm fully extended, and the sensation of your leading hand rotated so that the knuckles are pointing toward the ground.

Apply that feeling as you make your swing and strike the ball with the goal of sending it as low as possible. Use the image of the ball skipping across the turf with a low and penetrating flight.  The lower you can make it go the better, because that will organize you and the presentation of the club through impact in a powerful fashion.

Do this a few times, always keeping your eyes on the front of the ball and learn what it feels like to drive the ball, and not scoop it, into the air. It will impact your iron-game in the most positive way.