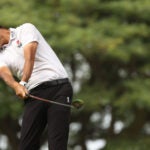 Kevin Na hits his drive on Sunday on the 2nd hole at Waialae Country Club.

The winner, somewhat playfully, somewhat confidently, “walks in” his putts — before his ball reaches the hole, he’s walking after it to pluck it out of the cup. He did so on 13 on Sunday. And on 14. And on 15. He didn’t on the 18th. Didn’t need to. He had just a 20-incher for the win. Not much bigger than his shoe. Kevin Na rolled that closing birdie in, and he’s the winner of the Sony Open. Here are three things you need to know after the final round at Waialae Country Club in Honolulu.

The three walk-ins ran Na to the top of the leaderboard.

Chris Kirk would catch Na at 20 under, before Na, in the final group, pitched his third shot on the par-5 18th, from just behind the green, to the 20-incher. Na finished with a five-under 65 and a one-shot victory over Kirk and Joaquin Niemann, who also birdied the 18th while playing in the final group.

Kirk, in need of a top 3 finish to retain full status on the PGA Tour via a major medical exemption, finished one better, tying for second. He played his first three holes at 2 over, then made seven birdies from there, including one on the 18th, for a five-under 65 final round.

“It’s incredible,” Kirk said. “I would have never guessed that it would work out this way this week, needing a top three finish to keep going. … I’m so thankful to have the support of my family through these last few years, especially, it’s been incredible when they probably were — you could have called them crazy for supporting me, but my wife, Tahnee, and my boys, Sawyer, Foster, Wilder, I just love them so much and I can’t wait to see them.”

Niemann, who lost last week in a playoff, shot a 66 and also finished one behind Na. Steele, Webb Simpson and Marc Leishman tied for fourth, two shots back, and Collin Morikawa, Daniel Berger, Billy Horschel and Patton Kizzire tied for seven, three strokes behind.

Steele, who lost in a playoff last year at the Sony, led by three shots at the turn before playing his final nine at 2 over.

Tiger Woods' car accident: Everything we know about what happened