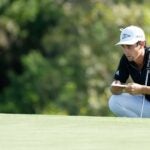 Joaquin Niemann at the Tournament of Champions on Sunday.

Welcome to the Monday Finish, your one-stop shop to tally the scores from the golf week that was and get ready to tee off on the week to come!

As Harris English played his final holes on Sunday, the Golf Channel broadcast kept cutting to Joaquin Niemann, clubhouse leader, who was prepping for a potential playoff…sort of.

If you’ve watched much tournament golf, you know exactly how this routine usually goes. A player posts an early number, he signs his scorecard, spends a few minutes chatting with his family, grabs a snack and then heads to the driving range to nervously hit balls, awaiting an uncertain fate.

Niemann got stuck partway through this script. He’d played with Sergio Garcia, a mentor and friend on Tour, and the two had decided to wear matching outfits for the final round (no doubt pleasing the folks at Adidas).

Post-round, Niemann met up with his girlfriend Christina and Sergio with his wife Angela. The four of them took some photos together and sat down for a late lunch. Good call, right? Everyone needs to fuel up before a range session.

In the booth, Justin Leonard voiced his concern that Niemann hadn’t made his way to the driving range. Each time the broadcast cut back to Niemann, looking increasingly more relaxed, Leonard sounded increasingly more concerned. Terry Gannon sounded worried, too. I started getting anxious on my couch. Should he get back out to the range? What would happen if he didn’t?

On the other hand, the critique of Niemann felt a bit speculative. Who are we to say the 22-year-old isn’t better off chopping it up with his friends rather than introducing extra swing thoughts and worrying about a playoff that might not happen?

“This feels like a little bit of a mistake,” Leonard said. Bones Mackay said a full warm-up was “absolutely essential.” John Wood said that were he caddying for Niemann, he’d give him no choice but to hit more balls. Lunch continued nonetheless.

The playoff did happen. Niemann rolled a few putts before shuttling out to the 18th tee. And then he absolutely torpedoed his tee shot 395 yards down the left-center of the fairway, easily 30 yards past English. The idea that Niemann should have been grinding on the range suddenly felt ridiculous.

English played first from the fairway, slugging a 3-iron down to the front edge of the green. But then Niemann stepped up to a long iron of his own and tugged it well left of his target. The ball hit the green but trickled just off the left edge and into some fluffy greenside rough. Suddenly it was advantage, English.

The rest is history: Niemann misjudged his chip shot and made par, while English converted his lengthy two-putt for birdie and the win. Was the range session that never happened the difference between winning and losing? Or was it mere coincidence? The beauty of golf — and of sportscasting — is that we’ll never know. But we’re free to speculate anyway!

One of the gripes of the modern power game is that PGA Tour players are never forced to hit long-iron approaches. But at Kapalua, a stunning Coore-Crenshaw design that pops off the TV screen, we saw tons of long irons. We saw fairway woods, too! They just happened to come on par-5s.

Kapalua has four par-5s, just three par-3s and plays to a par of 73. But there’s a reason more than half the field reached 15 under par this week: Those par-5s weren’t really playing like par-5s. Here’s how they played:

What does that mean? It means we got to see a lot of long-range missiles. It means the world’s best golfers were trying to reach the 18th green from 300+ yards. It means they were firing long irons at flagsticks, knowing that making par would mean losing strokes to the field. It means that according to par, the golf course played easy, but based on the shots they had to hit to keep pace with the field, it still played awfully tough — and compelling.

A nugget you won’t believe.

Mackenzie Hughes shot even par or better all four rounds. He hit 78% of his fairways, 75% of his greens, and finished…tied for last.

If you watched the tournament, this makes some sense. Kapalua’s fairways are wide, its greens are big and it yielded plenty of low scores. Still, though…

An awful lot, this week! The mics seem to be extra-hot in Hawaii. You’ll recall last year, Patrick Cantlay was caught on the 18th tee in full character, taking on the voice of an unsympathetic rules official talking about “these pampered f—s need to play” and “two more holes and we can get a Mai Tai.” He explained the joke later, but the moment itself revealed a different, humorous side of the oft-inscrutable Cantlay. No PR agency could have crafted a better moment of f-bomb exposure.

The hot mics were back in full force a year later, for good and ill. Mostly they came in handy for serious golf coverage purposes, like shedding light on player-caddie conversations. But that wasn’t all. Cantlay’s colorful language was back, caught cursing in a particularly quiet moment. Jon Rahm went on an anti-spike mark tirade, making his feelings known on metal spikes and what they can do to a green surface.

Unfortunately, the hot-mic moment that got the most attention was during Justin Thomas’ third round, when Golf Channel’s microphones picked up his utterance of an anti-gay slur. He apologized immediately after the round and again after Sunday’s final round, speaking of the moment as a learning experience. “I clearly screwed up, I made a terrible, terrible judgment call,” he told Todd Lewis after the round. “But I get to take time to get better going forward because of it.”

What a week in the golf-watching world! First came the debut of Golf Today, Golf Channel’s flagship new show. The name is a nod to the Today Show, NBC’s slightly higher-profile morning programming. But that connection felt appropriate, because Golf Today felt bigger than certain studio shows from its past. That’s in part due to a very literal studio move from Orlando, Fla. to the NBC Sports offices in Stamford, Conn. But it’s also because of personnel. Anna Whiteley and Jimmy Roberts form one hosting team, while Shane Bacon and Damon Hack form another.

I don’t have any hot-take big-picture feelings about the new show, except that it was fun to see something new and felt like a successful launch with remarkably few hiccups. Also, Bacon appears committed to a steady lineup of sweaters, which is about as edgy as the on-camera golf world gets. Show off those biceps, my dude!

Another Golf Channel debut of note: John Wood, a caddie-turned-analyst following in the footsteps of his now-coworker, Jim “Bones” Mackay. The tag team of Mackay and Wood were spectacular down the stretch, breaking down specific shots during high-pressure moments and dropping anecdotes to fill quieter stretches. Wood will keep getting more comfortable as he goes, but this was a super debut. Analysts are basically caddies for the viewers, after all. Maybe it makes sense that a couple former loopers would be aces at the job?

Finally, there’s what we were watching last night: Tiger, the much-anticipated documentary on the life of one Eldrick Tiger Woods. Woods himself wasn’t involved in the production, and some in his camp predictably weren’t huge fans of the final product — they tend to favor projects in which Woods holds editorial control. That doesn’t mean you have to agree with them, however. You should still watch it, and if you watched Part 1, just know that Part 2 is even better.

If you’ve been carefully following Woods these past couple decades, don’t expect to be hit with a treasure trove of new information. But there’s still plenty of insight to glean from this exploration of his life. You’ll be impressed by the complex portrait of a complex man, carefully painted by a group of interviewees who have spent time inside his inner circle or else years covering him — including our own Alan Shipnuck and Michael Bamberger.

WIPEOUT OF THE WEEK

The scenic shots from Kapalua are unmatched the rest of the year, with the possible exception of Pebble Beach. Whales? Mountains? Surfers? Ah, about those surfers…

The beginning of the new year means all kinds of free agency fun. You’ve heard all about Jon Rahm’s new deal with Callaway and TravisMathew, but have you formed an opinion on his newfound flat-brim game? We’re still on the fence. Worth noting he’s now rocking Jordans, too, which is an easy way to our hearts.

Resident gearhead Jonathan Wall wrote on this the other day explaining why Rahm’s gear shift was such a splashy bit of gear news. And while no other pro ranked as high is on the move, a few pros have made moves of note: Tommy Fleetwood took Rahm’s place on the TaylorMade holiday card, and Jason Day is going brand-agnostic to start the season.

One guy sporting some new duds this weekend: Patrick Reed! For years Reed was known as the second-most-famous red-shirted Nike golfer, but he and the swoosh have parted ways. Reed sported G/Fore shirts and Titleist hats, although Wall reported that he has no official deal in place with either company.

Oh, and here’s a snap of Garcia and Niemann, looking an awful lot like a well-dressed member-guest fourball team:

A safe bet for the week to come.

By week’s end we’ll have a good sense for the contenders to replace Trump Bedminster as the site of the 2022 PGA Championship.

One name floated will be the pride of my new home state: Chambers Bay in Washington. It’s time for redemption for the unfairly-maligned host site of the 2015 U.S. Open — and there’s never been a better time to showcase America’s very best munis. Make it happen, PGA!