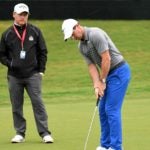 Conventional wisdom might be wrong about this element of the putting stroke.

Much like the golf swing, players have their own personal stamp or flare that they add to their putting technique to get the most out of their flatstick. There is no right or wrong answer on how to approach technique on the green — as evidenced by the contrasting styles of great putters such as Tiger Woods, who is very mechanical, and Ben Crenshaw, who is known for his languid stroke — but it’s important to find what works for you and commit to it.

In a recent Instagram video, putting coach Phil Kenyon broke down this counter intuitive phenomenon and how lie angle and stroke arc are related.

“What little influence it does have is the opposite of what many people would think,” Kenyon says.

Kenyon went on to explain that with a flatter lie angle (i.e. the toe of the club more off the ground) the stroke path should actually be less arced as opposed to more.

“It would actually prescribe a very shallow arc with very minimal rotation in the clubhead,” Kenyon says.

He then explained that the opposite is true when dealing with an upright shaft angle.

“If I place the shaft now fairly vertical and made the same stroke, then you would actually prescribe a stronger arc with that vertical shaft with a little more vertical rotation,” Kenyon says.

These might sound counter intuitive to what is thought of as conventional wisdom, but Kenyon does concede that at the end of the day, it is a matter of preference for the player.