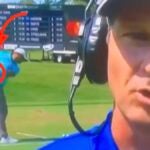 What is Tiger Woods doing?

Ah, yes, Tiger Woods. The GOAT. The best. A man who blends the artistry and athleticism of golf together with such majesty, and who’s swing is a thing of such bea—

Alright, so what’s going on here?

First off, don’t worry. Tiger Woods hasn’t watched Matt Wolff’s swing and thought: I need some of that, except the mirror image of it. It’s a drill — more like an exaggerated swing feeling — that he’s using to help him counteract a problem that has plagued him for years.

As I’ve written many, many, many times before, Tiger’s most common miss is a block to the right. Sometimes it’s been caused by his back injury; other times, it stems from things like tempo that’s too quick or not loading enough on the backswing. It’s not inherently bad or unusual that Tiger has a miss like this — most players do, after all. And whenever he’s not swinging well, he hits it a lot.

Thursday at the BMW Championship was one of those days. Tiger missed eight of 14 fairways — five of those to the right.

Tiger’s block usually comes off the tee. It happens when his arms get “stuck” too far behind him on the downswing, which brings us back to the strange driving range drill Tiger was doing in the video above.

Instead of looping the club outside and then getting his arms stuck inside on the downswing, he over-exaggerates the opposite. He whips the club away super inside on the backswing…

…and throws it over the top on the downswing.