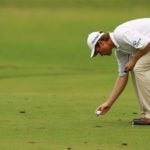 Are you allowed to pick up and replace your playing partner's ball? Rules Guy has the answer.

Someone in my weekly league has an incessant habit of lifting any ball she thinks might be hers without marking it. She refuses to take out her reading glasses and literally brings the ball up to her nose to identify it. To be clear, I’m not talking about searching for her ball. All of these balls are in plain sight in either the fairway or the rough. Whether or not it is her ball, she usually replaces the ball by tossing it from a height of a few inches near the original spot. If the ball is hers, I know she should be assessed a one-stroke penalty for not marking her ball and possibly a general penalty for playing an incorrectly substituted ball or playing from the wrong place. However, what is the ruling if she picks up my ball and does not mark it or replace it properly? I’m really not sure she incurs any penalty for this behavior and I find that absolutely mind-boggling. Rule 7.4 states there is no penalty if the player’s ball is accidentally moved by the player, opponent or anyone else while trying to identify it and it should just be replaced on its original spot. The penalty for breach of Rule 7.4 is the general penalty. Would you classify this player’s behavior as accidental?
—Kathy Bailey, Glen Cove, N.Y.

First off, my sympathies: Playing with Mrs. Magoo, picking up balls willy-nilly, must be exasperating. From a Rules perspective, players in the same group in stroke play are outside influences to each other, and, hard as it is to swallow given the specifics of your case, there’s no penalty if an outside influence moves a player’s ball.

Indeed, it’s the responsibility of the ball’s owner, when she has knowledge or virtual certainty of her ball being moved, to replace it on the original spot before she plays on, lest she incur a penalty stroke.

In match play, the player would get one penalty stroke for lifting your ball in play since she didn’t follow the required procedure for lifting a ball for identification. You would still need to ensure your ball gets replaced on the original spot, though either you or your opponent could do so.

Given that your nemesis’s behavior is a (bad, bad) habit, this is a matter that should be addressed before play, either by you or by the club, which could warn her that continuing this heedless lifting will result in some sort of ban. Failing that, Rules Guy suggests you get to your ball faster than she does.