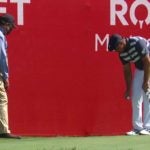 Bryson DeChambeau takes a drop as a rules official looks on during Sunday's final round in Detroit.

Bryson DeChambeau has been the talk of the golf world lately. Ever since the PGA Tour returned he’s been crushing drives and stockpiling top 10s, and last weekend in Detroit he followed up a well-documented run-in with a cameraman with a lights-out Sunday 65 and sixth career victory.

DeChambeau led the field in Strokes Gained: Off the Tee and Strokes Gained: Putting, but he also received some attention for a drop he took on the 15th hole during the final round. Not because he did anything wrong — he didn’t — but because the situation was confusing without the necessary context from the CBS Sports broadcast. Here’s what happened.

DeChambeau led the Rocket Mortgage Classic by two shots when he stepped to the par-3 15th, but he sent his tee shot over the green. It trickled through the fringe and just beyond the first cut of the rough and into the thick stuff.

That’s where the confusion started. Here’s where the ball came to rest, just to the side of two sprinkler heads:

When the broadcast returned from a commercial break, we saw DeChambeau and his caddie talking to PGA Tour Senior Tournament Referee Brad Fabel. DeChambeau had tees on both sides of the sprinklers and was taking a drop, since his stance would have been on the sprinkler heads.

“And this will be very helpful,” Jim Nantz said on the broadcast. Trevor Immelman added: “This is extremely helpful, Jim. His ball actually came to rest up against the collar there, so this is a good break.” After his second drop, the broadcast mentioned that the ball was in play and CBS moved to a different part of the action. About a minute later the cameras returned to DeChambeau, this time with a driver in hand and surveying another drop to the left of both sprinklers.

“They are still dropping?” Faldo said. “What’s going on?”

“I think they felt like the first drop went closer to the hole, Nick,” Immelman said.

DeChambeau then dropped a third time, and then a fourth, the last one coming to rest on the fringe before bouncing backward and stopping right on the edge of the first cut. DeChambeau knocked it close and cleaned up his par.

It was anti-climactic from there — DeChambeau cruised to a three-shot win — but social media was buzzing about his drop. What exactly happened and why, more importantly, did he get to go from the rough to the fringe, an obvious advantage?

But here’s what happened, and why DeChambeau did nothing wrong. Based off where his tee shot landed, his feet were on one of the sprinkler heads. That meant he was entitled to a free drop via Rule 16.1b, Relief for Ball in General Area. That’s what he was doing for the first two drops.

When the camera went back to DeChambeau a minute or two later, he had a driver in his hand and this time had moved to the left of where his initial drop was, and left of the sprinklers, with two tees stuck into the ground as reference points. It wasn’t mentioned on the telecast, but the driver was out because DeChambeau was taking free relief, this time since the sprinkler head was in the area of his intended swing, just as before it interfered with his stance. Per the Rule, he’s allowed to take one club-length of relief from the reference point. So DeChambeau dropped two more times, and he played his ball on the fourth.

To sum, DeChambeau essentially took relief from two different sets of sprinkler heads, using relief under Rule 16.1b twice. (According to the USGA, “This isn’t any different than, for example, taking free relief from a cart path and then after doing so having interference from a sprinkler head — you would again have the option to take free relief.”)

Many viewers were also confused how he could change surfaces from the rough to the first cut, but the Rules don’t differentiate between rough and fairway (or in this case, the first cut beyond the fringe). It’s all encapsulated in the “general area.”

The shot/drop wasn’t mentioned again until later in the broadcast, when CBS called it the “Geico Save of the Day.”

“Well, I think the save of the day was the drop,” Faldo said. “It hopped into the rough and he was standing on some sprinkler heads, and that was probably the real save.”

How to hit on a sidehill lie: 5 tips for when the ball is below your feet

This putting tweak has Phil Mickelson channeling his younger self