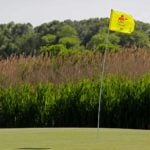 You can leave the flagstick in wile you putt — but is it permissible to lean a club against it too?

I was playing in an early-morning match and there was a lot of dew on the green. After chipping up, I leaned my wedge against the flagstick to keep the grip dry and putted out with the flag in the hole. My nerd opponent told me this was a violation. Was it?
—Ryan Cox, Panama City Beach, Fla.

My slang dictionary — Rules Guy is the keeper of many, many dictionaries — defines nerd as “one whose IQ exceeds his weight.” Now, Ryan, a desire to play by the Rules should be lauded, not roundly mocked.

That said, your opponent is a nincompoop! Kidding … but he or she is incorrect. While your move might seem dodgy and not exactly a recommended procedure, it’s not a Rules violation.

Rules Guy might add that as a general rule, accusers should know precisely what they’re accusing someone of before hurling said accusations, lest they be branded a dunderhead.

How to use the ground to hit a draw, a fade, and a straight shot

Put these 4 steps into play for smarter course management