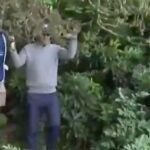 Padraig Harrington and caddie move a large branch at the Irish Open.

If you’re familiar with the intricacies of the Rules of Golf, you can save yourself some strokes. Padraig Harrington is familiar with the rules as a pro golfer, and he took advantage of that knowledge during the opening round of the Irish Open.

As Harrington was navigating his way around Galgorm Castle Golf Course on the way to a first-round 71, his ball sailed well wide of the fairway and into a grove of trees. The good news? The ball was found and playable. The bad news? His swing was impeded by a massive fallen tree branch.

Luckily for Harrington, this branch — despite being quite massive — is considered a loose impediment and, under Rule 15.1, legal to move.

“You may remove a loose impediment without penalty anywhere on or off the course, and may do so in any way,” the rule states.

So Harrington, with an assist from his caddie Ronan Flood, got his hands dirty and moved the large branch out of the way to allow for a clean swing.

This situation is much like the scenario involving Tiger Woods at the 1999 Phoenix Open. With a boulder in his swing path, Woods enlisted the help of a handful of fans to help push the heavy rock out of the way.

Although we may not all be strong enough to move these large impediments, it is well within the rule book and could save you a few strokes.

Doing this on the golf course can make you happier and healthier, according to a new study