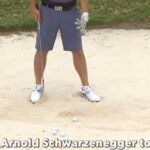 Padraig Harrington dishes on how to hit a greenside bunker shot.

Arnold Schwarzenegger, Padraig Harrington says, is good. He can click away.

But most every other amateur would do themselves well to scroll down.

In a recently released video by the PGA Tour Champions, Harrington dished on how to hit a greenside bunker shot. It’s straightforward, too, the three-time major champion and last year’s European Ryder Cup captain said: Slide your club under the ball. And to do this best?

“We’re trying to hit about two inches behind,” Harrington said.

Only amateurs quadruple that distance, he said. And few can hit a whopping eight inches away from the ball.

“I think you’d want to be Arnold Schwarzenegger to lift eight inches of sand and the ball,” Harrington said.

“… You don’t have to hit the ball hard in the bunker because I’m only taking a little bit of sand, whereas amateurs take this big heap of sand in it, and you just, physically nobody is strong enough to do that.”

So what’s an amateur to do? You could lift. Or, Harrington said, you could move most of the weight you do have to the left.

“You want to get your sternum left on top of the ball,” he said. “So you want to get like 90 percent of your weight onto your left side. The whole idea, you’re trying to slide the club under the ball — it’s nearly like fresh-airing the ball by sliding underneath it. So to do this, we want to be on the left side, and watch, we’re trying to hit about two inches behind. A lot of people will try to hit two inches, and it really does end up hitting back here. But most people are trying to lift the ball in bunkers. So if I can, if I’m set up nicely on my left-hand side, sternum’s over the ball, ball position is quite a bit forward.

“All of a sudden, you’re hitting eight inches behind.”

He then swung twice more.

“This is what you guys look like: If you back up [swings], all that effort, and the golf ball’s gone nowhere,” Harrington said. “Whereas when a pro hits it, he sits on his left-hand side, he stays left, and watch how [swings] how easy I hit that to get it to go all the 15 yards or so to the hole.”

To watch the complete video, please scroll down. And to watch additional tips from Harrington — and all are worth your time — check out his YouTube channel here.