The ‘shocking’ revelation Padraig Harrington had about his game 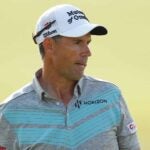 As a three-time major champion still with plenty of pop in his swing, 50-year-old Padraig Harrington might rightfully have expected to enjoy immediate success when he played his first couple of PGA Tour Champions events late last year.

In at least one statistical category, he did: driving distance.

In his maiden start, at the SAS Championship, in Cary, N.C., in October, Harrington — who averages north of 300 yards per poke on the PGA Tour — quickly established himself as one of the senior circuit’s biggest bashers. Harrington didn’t play enough events in 2021 for his stats to register in the PGA Tour Champions’ database, but this anecdote from the SAS, which Harrington recalled recently in a video released by the Tour, said it all: On the par-5 17th hole at Prestonwood Country Club’s Meadows course, Harrington said, most of the field was hitting 3-woods into the green, whereas all Harrington required was a 9-iron. If you’re keeping score at home, that’s roughly a 10-club differential.

Advantage, Harrington? Yes, but also … no.

“I was shocked,” Harrington said. “I’m substantially longer than the field and yet I got lapped in the first two events.” Harrington finished 18th at the SAS then a week later finished 55th at Jim Furyk’s event in Jacksonville, Fla. “I just wasn’t with it. These guys were just running by me. I played with Bernhard [Langer] and he made me look like an amateur golfer.”

Harrington, along with Phil Mickelson and a few others, is in a unique position in that he’s still long enough and good enough to compete on the PGA Tour — he tied for fourth at the PGA Championship in May — but now of an age where he also can try to rack up wins and cash on the Champions tour. It’s an enviable position to be in, but also a tricky one.

“It was a lesson for me,” Harrington said of the transition. “For me to try and stay competitive on the main tour, I’ve worked on speed, I’ve worked on length. Last year, I led on Strokes Gained in over 200 yards on the PGA Tour.”

But booming tee shots, he realized, is not at all what he needs to climb leaderboards against the senior set. “What I thought I needed was not the case at all,” he said. “I needed to be smart like I would have been in my heyday. I’ve got to be strong mentally. I’ve got to be good with my wedges. I’ve got to be clever.

“I’ve definitely strengthened my weaknesses but I [also] weakened my strengths, and that was a big eye-opener. If I want to go out there and beat these guys, compete with these guys — just because you hit it past them ain’t gonna do it. You’ve got to [be] very good with your wedges, very good scoring. It was fascinating to me. I’m just not a good enough wedge player.”

The stats support that assessment. Harrington ranked 147th in SG: Around the Green in the 2020-21 PGA Tour season. His scrambling from 10-20 yards was particularly problematic. Harrington’s up-and-down conversion rate from that distance was just 51%, compared to the Tour average of 64%.

Drive for show and putt for dough? Sure. But the putting part becomes much easier when you’re chipping it close — no matter what tour you’re on.