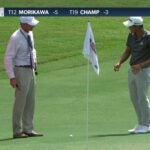 Morikawa didn't have to use the Rules on Sunday, but it definitely worked out for him.

PGA Tour rulings happen all the time, and sometimes it’s quite clear players are using the rules to their advantage (or at least trying to). That was never more clear than Sunday at the Tour Championship, where Collin Morikawa took embedded ball relief on the 8th hole.

Morikawa was five under for the event and had left his approach shot just short of the green on the par 4 at East Lake. Apparently, the ball had stuck right in its landing spot.

It isn’t clear to the TV viewer, but the ball had apparently created a slight depression in the turf and sat within it, creating a tricky lie for Morikawa to maneuver. The key factor is that the ball, when it struck the turf, had broken the turf slightly as well. There was dirt to prove it.

After a Tour rules official investigated, he initially voted that Morikawa had to play his ball as it was. No relief. But after further convincing, and an even closer look at the turf, they deemed the ball to have broken the turf. He would have the option to drop for free relief within one club-length.

The rule in use here is Rule 16.3, which states “relief is allowed only when your ball is embedded in the general area,” and not when it is in a bunker. Since Morikawa’s ball was on a slope, his two initial drops didn’t hold their position within a club-length, so he was able to place his ball.

After going through his procedural scanning of the green — which greatly impressed the broadcasters — Morikawa played a pitch up to three feet and made his par. Onwards and upwards. He’d make six birdies coming in to race up the leaderboard with just 18 holes left in the big money event. Play more rounds in cooler temperatures without distraction in the bulk-free Adidas Layer Sweatshirt. The sweatshirt is designed and created with a drawstring cowl neck that offers additional coverage, thumbholes to keep your hands warm, fitted sleeves and bottom band to help keep the warmth in, and useful pockets to hold small golf-related accessories. The sweatshirt is light enough to be tucked into your bag when the weather warms up.
Explore the Pro Shop Sold out