The Etiquetteist: Sandbaggers in your midst? Here’s how to deal with them 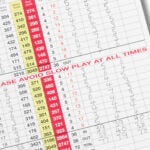 You shouldn't have to question your partners' scores but alas ... sometimes you do.

Golf is widely seen as a conservative sport, yet it relies on a system of social handouts. Players carry handicaps and give one another strokes. The goal is to establish a level playing field. But people being people, some take advantage. Always have. Always will. What to do about it is another matter.

Here are 10 suggestions for dealing with sandbaggers in your midst.

The sandbagger is, at heart, a sad and lonely figure, willing to sacrifice integrity and friendship for the sake of a soulless win. Looked on in this light, he or she deserves your sympathy, not your scorn.

2. Turn the other cheek

This is not a swing tip that calls for more rotation of your lower body. It’s a plea to your capacity for forgiveness, a request for recognition that all of us are human and therefore deeply flawed. Except you, of course.

This is a wildly popular approach. As the alleged 15-handicap who plays to 2 strides to the podium to accept his 12th consecutive net-division plaque, grouse and grumble to your buddies at the table. Let out a mournful chuckle and shake your head. Although this strategy will change nothing, don’t dismiss it. There is great satisfaction in passive-aggression and petty chatter behind someone else’s back.

You could post it on her locker or the windshield of her car, making plain your displeasure with her dishonesty. What this method lacks in courage it makes up for in clarity. And it’s (slightly) more mature than slashing tires.

5. Give the cold shoulder

Even those who are self-centered enough to sandbag are not entirely oblivious to social clues. Among groups of golfers, is it not uncommon to gradually freeze the sandbagger out of matches. This tactic takes time. But at some point, the offender gets the hint.

We’d suggest that you speak to the head of the handicap committee, but the handicap committee is a fading institution. A lot of clubs no longer have them because, well, who in their right mind would want to sit on one? The more likely go-to for your grievance is the head professional, who often winds up in the middle of handicap disputes, navigating a minefield of politics and personalities, among other messes that sandbaggers leave behind.

Light-hearted jabs are another way to get your point across. Just beware that you’re walking a fine line. What seems to you like playful ribbing may be taken as fighting words. There is truth in humor, after all. And kidding aside, you are essentially calling them a cheat.

This is the old-fashioned pugilist’s approach, moving straight ahead, letting the verbal haymakers fly. Mince no words. Let them have it. With the understanding that you might leave a friendship flat-out on the floor.

Current political climate notwithstanding, there are ways to hold a conversation without letting it turn into a hostile confrontation. Instead of bluntly branding someone with the s-word, try couching your critique in euphemism. “You’re clearly a great competitor,” you might offer, “with another gear when it really matters. Given those gifts, would it not be sporting to adjust your index to more accurately reflect how clutch you are.” Like most diplomacy, it is worth a try, even if it leads to all-out war.

Good news, someone has already done the hard work for you! His name is George Thurner, 58, a longtime scratch player with a background in data analytics. Two years ago this month, he launched a service called Cap Patrol. Originally intended for use at the private club in Cincinnati where Thurner belongs, Cap Patrol has become a business, and Thurner has made it his full-time job.

As its name suggests, the system functions as a golf-world RoboCop, policing players’ rounds and scores to ensure that performances square up with true potential. As part of its surveillance, Cap Patrol crunches numbers across 43 data points, scanning everything from tournament results to GHIN indices and tee-sheet records, distilling its findings through an algorithm, which in turn flags suspicious rounds.

There’s much more to Cap Patrol than we have space for here, but it’s worth nothing that fabled Oakmont was an early adopter, and the system is currently in use at several hundred clubs across the country, all of them private or semi-private. If you belong to one of them, lucky you. Cap Patrol has you covered. If not, we refer you to methods 1 through 9.