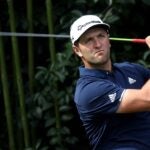 Jon Rahm's swing thought can help your game, too.

To say it’s easy to overthink when playing golf would be an understatement. Often times, when we start playing poorly, overthinking is as much to blame as poor mechanics.

But think about the last time you played well — what were you thinking about? It’s likely your swing thought was extremely simple. And that’s not a coincidence. If you can simplify your swing thoughts, you will more than likely see lower scores.

Jon Rahm touched on this during his media availability at Augusta National Tuesday afternoon as he explained what clicked for him in a strong performance at the Zozo Championship. “I think as golfers, a lot of times, it’s easy to try to get too many swing thoughts and just almost think about the swing instead of just feeling it and swing it,” he said. “I focused on swinging the club and not thinking so much.”

It’s extremely simple advice, but in golf, simple is better. Getting too much in your own head is a recipe for disaster. Rahm mentioned that he was too concerned with the positioning of his hands. To alleviate that, he just stopped thinking about technical aspects of the swing, and instead let his feel take over.

“I just started to swing it, just hit it, forget about where my hands are at,” Rahm continued. “Started gaining confidence and hitting good shots, and it carried on the rest of the week. Nothing special, honestly. If anything, trying to get into a flow state rather than thinking about the process state.”

It’s a good lesson for all golfers that can help with your game — especially when things start to go sideways. Eliminate too many swing thoughts and let your feel take over. If it’s good enough for one of the best players in the world, it should be good enough for you.