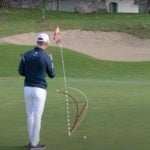 Everyone wants to make more putts. I know I certainly do, and it’s something I think about far too often. Enter the team of Piers and Andy over at Me and My Golf, who are launching a “Complete Putting” coaching plan on their website, along with a seven-day free trial (which you can sign up for right here). You can watch the first episode of the series below:

There’s lots of great stuff within, but my favorite section focused on green reading.

Ultimately, putting is a simple art — deceptively simple. The stroke is a simple motion, which means so much of the difference between success and failure on the greens involves mental skills. Chief among them: green-reading ability.

Which brings us to one of the biggest mistakes people make on the greens. Andy demonstrates this by standing over a 20-footer and explaining that golfers generally look at a putt like this and visualize how it’s going to break. So far, good.

But then, they make the fatal mistake of aiming for the apex of the break. And therein lies the problem. The apex is supposed to be the point where the putt breaks off; if you aim straight for it, the putt won’t travel straight and then start curving. It will begin curving off it immediately (gravity!) and ultimately, curve below it, resulting in a missed putt.

That’s why the pair encourages you to pick a start line that will result in the ball rolling over the apex of the putt. A simple way of doing this, they say, is to simply practice doubling the amount of break you think there is on the putt in front of you.

Understand the apex of the putt, and how the ball responds to it, and you’ll be well on your way to making more putts.

For more from Me and My Golf, head over to their site here.