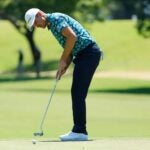 Transitioning to the claw grip has transformed Justin Rose's putting.

Justin Rose has been a top-20 player for the better part of a decade — even reaching World No. 1 back in 2018 — and putting was a major factor in his ascendance.

One of the major difference-makers in Rose’s putting game has been his adoption of the claw-style putting grip, which utilizes the arms and shoulders to push the ball rather than the hands. Rose first toyed with the grip back in 2016 before taking a short break and finally putting into play full time.

For Rose, his putting grip is more than just a way to hold the club — it has also transformed his entire approach to putting. In a recent phone interview on behalf of Rose’s appparel sponsor, Bonobos, Rose explained just how much of an impact the grip has made to his putting routine overall.

“I feel like my setup now and the way I grip the club by using the claw, my stroke mechanics are so much more simple,” Rose said. “So I can dedicate time towards the other things that make putts.”

As it turns out, those “other things” are numerous.

“I made some good stroke mechanic changes with Phil Kenyon. And I’ve done some great work with Jason Goldsmith around my putting routine, my visualization,” Rose continued. “I do a lot of technical practice and skill acquisition, like practice aiming, definitely practice reading the greens much more than I used to. I have that sort of Aimpoint Express type of theory now, where I use that to give myself a ballpark read, which I think stops me under-reading putts, maybe like I used to. So definitely I’ve acquired some different skills, but all of those skills have taken a lot of the emphasis away from my stroke mechanics, which I used to get so caught up in.”

For Rose, the transition to the claw not only simplified his stroke, it also freed him up to work on other important aspects of his putting. And clearly, he’s doing something right, as Rose is coming off a top-10 finish at the PGA Championship, where he ranked 15th in the field in putting average.

The moral of the story: if you find yourself regularly pushing or pulling putts, transitioning to a claw grip may be a viable solution for you, too.