What is ‘the claw’? Breaking down the putting grip that won the Ryder Cup 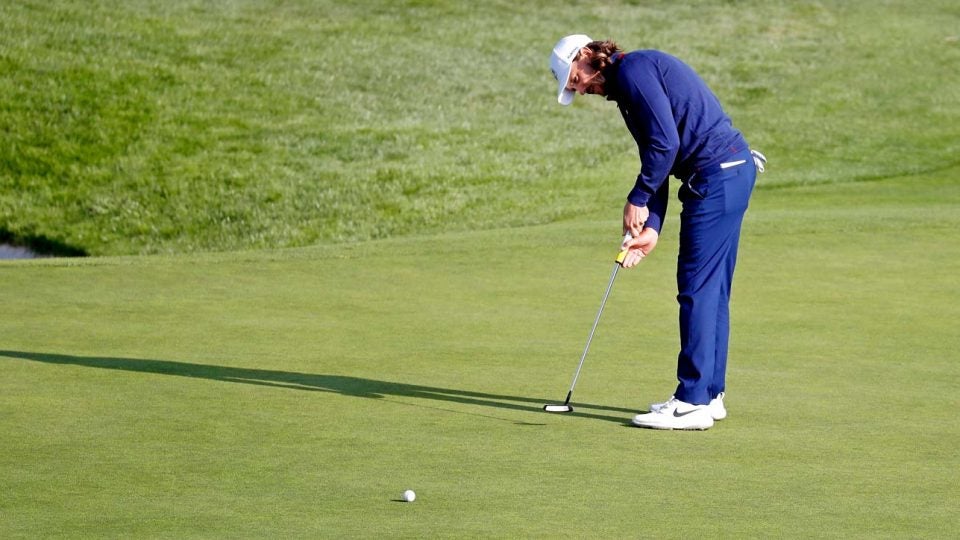 Not long ago it was borderline unspeakable. A final act of desperation that looked so strange it elicited giggles at first sight. It even sounded weird. “The claw.”

But with so much money on the line, pros can only muster so many bad putting days before they try something new.

It started with Chris DiMarco and former major winners Mark Calcavecchia and Mark O’Meara. Slowly, the claw became more embedded in golf’s mainstream. It seemed to hit a high point during the 2018 Ryder Cup: Four of the 24 players involved – Justin Rose, Tommy Fleetwood, Sergio Garcia and Webb Simpson – used the claw. Combined, the four players went 11-5-0 and comprised 25 percent of the winning team.

So, how does the claw work? And should you consider switching yourself? Let’s break it down…

There are three main advantages to switching to the claw, according to our legendary Top 100 Teacher Dave Pelz:

There are some drawbacks, Pelz goes on to say. Mainly that it looks odd and many say it feels awkward – especially at first. But the point remains: When golfers feel their right hand getting too active in the stroke, and find themselves pulling or pushing putts as a result, the claw may be the answer.

The goal of the claw is to effectively neutralize the right hand by taking it almost completely off the club. The left hand (right for left-handers) remains in a neutral position at the top of the club while the right hand (left for lefties) is cocked to the side with your palm facing towards your body.

Your thumb on your bottom hand is wrapped around the club, as you can see in a close up of Tommy Fleetwood’s grip below, and the only other fingers left on the club are your index and middle fingers. Right hand grip pressure is usually extremely light. Using the claw is almost like you’re putting one-handed. The right hand is just a passenger; the only reason it’s there at all is to provided a little more stability. As Pelz says, you’re n0 longer putting with your hands. You’re using your arms and shoulders to push the ball.

Webb Simpson, like Justin Rose and Sergio Garcia, prefer to keep their right hand a little more on top of the club than Fleetwood, whose hand is more to the side , but it’s only a slight variation. The right hand is effectively taken out of the equation, and the arms and shoulders drive the stroke.

The results, as we saw last weekend, speak for themselves.

Your Takeaway? If you feel your right hand getting yippy or too active in your putting stroke, the claw might be for you. But be aware: It’ll probably feel awkward at first and you’ll need to put in the practice to see results.