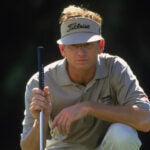 Brad Faxon, one of the best putters of all time, has holed lots of putts over the course of his career. And he knows what any good putter knows: That often, it’s your actions before you even hit the ball which will determine whether your ball will end up in the hole or not.

A good routine is one that settles the mind and body before executing the precise art of putting. A series of movements that should help golfers feel comfortable, confident, and ingrain a specific feeling they can use for the putt they’re about to hit. And all in a timely manner that doesn’t disrupt your flow.

If you’re wondering what a routine like that looks like to potentially adopt for yourself, Faxon shares a worm’s-eye view of his five-step process below.