How these 3 small changes can fix your short-putting woes 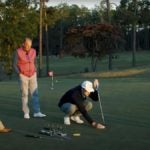 First off, if you’re not subscribed to Golf Science Lab on YouTube, go over and give it a follow. Cordie Walker, the man behind it, spends his time traversing the country looking for the latest science-based information that can help you play better golf.

Along his way, he made a pit stop at the GOLF Top 100 Teachers Summit, at Pinehurst, where he snagged a quick lesson and putter fitting with GOLF Top 100 Teacher David Orr and True Spec Senior VP Tim Briand. (Ed. note: True Spec and GOLF.com are operated by the same holding company, 8AM Golf.)

Turns out Cordie was having some trouble over his short putts, which he kept pulling and missing left under pressure. So Orr, Justin Rose’s former putting coach, helped Cordie fix the issue with three helpful pieces of advice…

1. Face square to the arc, NOT the target line

After hitting a few putts, Orr discovered that Cordie was an “under-twister.” This meant that rather than the face of the putter working slightly open on the backswing, it would actually shut slightly and move outside the arc. Orr says this isn’t abnormal: It’s common for pushed and pulled putts to be caused not on the downstroke, but on the backstroke.

After a brief interrogation, Orr discovered this flaw was the result of Cordie trying to make a straight-back, straight-through putting stroke. That’s an issue that haunts many golfers, Orr said. The putter is not set at a 90-degree angle; it sits at an angle, which means (in simple terms) the putter will want to move along a natural arc, with a slight opening and closing of the blade. But because Cordie was attempting a straight-back-and-through stroke, he was trying to manipulate the putter face and in doing so, closed the face too much on his backstroke.

One of the ways Orr knew Cordie was an under-twister was by lining him up straight, at which point Cordie would begin missing putts left.

To compensate for his closing of the putterface on the backswing, Cordie was subconsciously aiming to the right of the hole, and pulling it back to square. That’s not necessarily a problem in itself — you can read more about Orr’s overall philosophy here — it only becomes an issue if Cordie couldn’t repeat it consistently. And, as we said from the outset, that was exactly what was happening: He was missing short putts, because under pressure he would be thrown-off and he wouldn’t be able to make those micro-compensations to account for under-twisting.

It’s a good lesson for all of us: Pay attention to your aim, because it may be covering up for other issues and making them worse.

Too many golfers disregard the importance of putter-fitting when it might actually be the most important club to get fit.

Armed with the knowledge of what Cordie needed to do to improve his putting, Briand gave him a quick putter fitting and matched him with a model that would help him achieve what he and Orr were working on. They landed on a toe-hang mallet, which would help counteract the under-twisting and neutralize Cordie’s stroke.

Another good lesson for all of us: Invest in a good putter-fitting. It can improve your putting with minimal effort.

When to practice off good and bad lies, according to a Hall-of-Fame golf coach