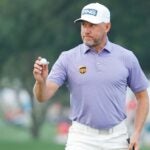 Like a fine wine, Lee Westwood only gets better with age.

Lee Westwood might be nearing Champions Tour eligibility but based on the quality of his play as of late, you’d never know it. The 47-year-old recorded back-to-back runner-up finishes to open up the month of March, and he’s climbed to the top 20 in the Official World Golf Ranking for the first time since 2013. Like a fine wine, Westwood only seems to get better with age.

In an era being dominated by long hitters, Westwood’s success goes against conventional wisdom. Despite many factors working against him though, his game is still quite competitive. But what’s the secret to the Englishman’s longevity? He finally took some advice to heart from one of the game’s all-time greats.

“Nick Price told me years ago that I should start going in the gym and it took me about seven or eight years to listen to him,” Westwood said at last week’s Honda Classic. “[I] started getting stronger in the right areas, working with Steve McGregor, and it’s given me the longevity. We have worked on specific areas that are going to wear down in a golf swing and built muscle around those. So I’ve got a bit of protection from bad backs and bad shoulders and bad knees and bad hips.”

Westwood’s workout regimen is a far cry from the intense sessions that Bryson DeChambeau puts himself through, but when you’re nearing 50, all it takes is working out the correct areas to keep your body fresh.

Matt Jones had a heck of a week in south Florida as he got his first win on the PGA Tour in nearly seven years. His five-stroke margin of victory showed flashes of brilliance in all areas of his game, but his work scrambling around the greens might be the most impressive. Jones ranked second in the field in SG: Around the Green for the week as he saved par 13 times after an errant approach shot.

To translate some of that feel with the wedges in his hands to his putter, Jones used a unique drill on the practice greens. As seen in a video posted by the PGA Tour, he holds both his putter and a wedge in his hands as he starts making strokes and hitting the ball. His goal is to get the same comfortable feel that he has in his wedges to transfer over to his flat stick.

It’s certainly an unconventional-looking routine, but it’s hard to argue with the results. Jones ranked inside the top 25 in SG: Putting at PGA National and lapped the field by week’s end.

Justin Thomas took a well-deserved week off after his Players Championship title, but that doesn’t mean he wasn’t busy keeping his game sharp. And in a video posted on his Instagram, Thomas gave his followers a few tips on how to hit a slinging draw.

“Tee it low, shut the face down, close the stance, send it!!!” he says in the caption of the video. That might be an oversimplification, but the fundamentals he preaches are on the nose. If you want to hit a low draw, emulating Thomas’ move is a great jumping off point.

Thomas used that same low draw during his Players Championship title two weeks ago during the final round, notably on the 16th tee when he roped a draw around the corner and set up an easy birdie. It’s not the easiest shot to master, but if you can add the shot to your repertoire, you’ll be in great shape when the pressure ramps up.