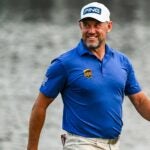 Lee Westwood is one of the favorites to win this week’s Honda Classic, and for good reason. He’s been the runner-up on Tour the last two weeks after holding the 54-hole lead at both the Bay Hill Invitational and Players Championship. No, he didn’t win, but he’s still playing good golf, and he has the fourth-best odds (4/1) to win this week.

But there’s been yet another close call thrown into his recent results. A loss to his son, Sam — at Augusta National.

Westwood, speaking on Wednesday at PGA National, told the media about his last few days following his Players defeat, which consisted of 54 holes at the home of the Masters: 36 on Monday and 18 more on Tuesday.

His son also picked up a victory in thrilling fashion.

“He chipped in on 18 [Tuesday] to take the money,” Westwood said. “We’ll not discuss the shots. I will say it’s as hard as I’ve seen Augusta play, even when it’s been the week of the Masters. It was cold [Tuesday] morning, 45, 50 degrees. It was playing long, and the greens were like rock. They were really releasing out. It was a tough couple of days to play Augusta. Yesterday I think he shot 82. I set him a target of 83 and he chipped in on the last for birdie for 82, so he won the money.”

Despite his success with his girlfriend, Helen Storey, on the bag, Westwood will have Sam caddie this week. Sam will also caddie for Westwood at the Masters in a couple of weeks.

“I just like being out there with the both of them,” Westwood said. “Both keep me relaxed. We have good chats out there. It’s good bonding time. Helen picked the last two weeks to caddie. I think she’s sick she didn’t pick this week now. She was on a run, wasn’t she, but she’s here, so I’ll be able to chat to her at night about stuff that’s going on on the golf course. But Sam is enjoying himself and looking forward to this run of tournaments where he’s getting to caddie.”

Westwood’s opening round of the Honda begins at 12:53 p.m. ET on Thursday.