Why are pros wearing yellow ribbons at this weekend’s Honda Classic? 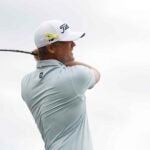 Just about every pro in the field at the Honda Classic is wearing a yellow ribbon for a worthy cause Sunday.

If you’ve tuned into this weekend’s Honda Classic, it’s likely you’ve noticed the tournament has taken on a distinct pigment: yellow. It’s everywhere — the flags, the shirts, and yes, even the ribbons.

The PGA Tour’s longest-running title-sponsored event is celebrating its 40th anniversary this weekend at PGA National in style, ringing in the beginning of spring with a fittingly shaded honorarium for its host, Jack Nicklaus. On Sunday, many of the tournament’s top players are sporting yellow attire, and dozens more are wearing a small, yellow ribbon affixed to their hat, bag, or shirt.

But the yellow attire is not only to pay tribute to the Golden Bear. More accurately, it is for a cause close to Nicklaus’ heart.

Each year, the Honda Classic serves as the launching off point for the annual Play Yellow campaign — a movement between the PGA Tour, Nicklaus Children’s Healthcare Foundation and Children’s Miracle Hospitals in support of those with childhood cancer.

The cause originates back to Nicklaus’ playing career and his relationship with Craig Smith, a family friend and passionate golf fan who was stricken with Ewing Sarcoma, a rare bone cancer. Jack and Craig spoke often, including when the 13-year-old fan once predicted that Jack would win wearing his lucky yellow shirt.

Today, the Play Yellow campaign helps raise money for the fight against childhood cancer through the game of golf. Club manufacturers, golf courses and the PGA Tour all participate in the cause, with funds going toward the Children’s Miracle Hospital network.

Those who wish to take part in the campaign themselves can learn more by following the link here.