A Justin Thomas-inspired drill to improve your backswing 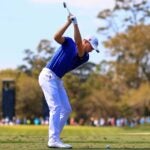 Justin Thomas got his groove back…

What a weekend. Indeed, a record-tying performance, JT put on to claim the The Players Championship.

His rounds of 64 and 68 on Saturday and Sunday were sublime displays of golf, because I can tell you first-hand: the course was not playing easy at all.

I was part of the PGA TOUR LIVE Featured Groups coverage and saw how The Stadium Course was playing up close and personal.  Typically benign and receptive in the morning, the sunny, mild and breezy conditions, with low humidity, sucked the moisture out of the place and it typically played tougher later in the day.

Credit to Justin for managing the conditions and crafting that 64, the low round of the day, on moving day.

And credit also to him for navigating his emotions, his temporary slump leading into the event, and his gritty finish on Friday just to make the 36-hole cut — he birdied two of his last three holes on Friday to slip inside the cut-line.  He did so with less than his best and it illustrated his mental acumen as well his his understanding of how to manage a day with less than your best. (An important lesson for everyone reading this: you don’t have to play your best game to shoot decent scores.)

Saturday and Sunday he was a virtuoso.  He putted great on Saturday and struck the ball magnificently on Sunday.  His Sunday ball-striking day, around a demanding venue, got me to thinking about his golf swing and what you can learn from it:

The case for high hands at the top of the backswing

I have asked his dad, and coach, Mike, about it. Mike mentioned that he has no problem with the swing being more upright, and that all they keep tabs on are the clubshaft not getting too far across the line and the swing not getting too long.

The are certainly advantages to a higher arm-plane at the top:

Typically, players with higher hands at the top are better iron players too.

Now it pays to be realistic about everything and not everything is the next great elixir for your ball-striking.

I would advocate though that you get to a place where your lead arm is at least cutting through the seam of the shirt of your trail shoulder if you feel your arms are too deep and behind you at the top of your backswing.

OUR TAKE: We’ve seen tour players gravity to high MOI models perhaps more now than ever, and Scotty Cameron has decided to double down on the category with the release of new models in the popular Phantom X putter series. Said an ecstatic tester, “These are the best-looking putter in the bunch that I’ve tried. I love the feel and the different alignment options. The black and yellow pops!”  THE DETAILS: Four models in the Phantom X line of high MOI putters (5, 5.5, 11, 11.5) have been revamped to take better advantage of the stainless steel/aluminum construction, with the new 5.5 catering especially to players who want a gamer that resembles the one used by Justin Thomas. The complete Phantom X series, which includes additional neck configurations, includes a variety of styles and alignment aids to fit the eye of any discerning player.  Check out 150+ reviews from our gear experts in the ClubTest 2021 collection.
Buy Now

A simple drill to help

The first thing to be aware of is that you don’t just lift and raise your arms to the top of your swing.

The higher hands position should be a function of the correct forward spine tilt, an appropriate pivot and a little free swing of the arms.

A great way to feel this is to grab a play-ball or soccer ball and throw it over your trail shoulder as you make your backswing.  Imagine an elephant throwing water over its back with its trunk.  The elephant’s body remains stable and down and the trunk swings freely over its shoulder.

In the same way, grab the ball with your palms on each side of the ball and assume your address with proper spine tilt forward.  From there make your pivot and with stretched arms release (throw) the ball over your trail shoulder.  If you do it correctly you should throw the ball somewhat parallel with the target-line.  Hold that finish position for a little while and sense where your hands are located – they should be pretty close to the ideal position.  Try and straighten the elbows a little to add some width to your swing arc – it will further engage and load you up and you will feel like you can smash the ball.