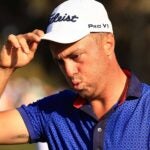 Justin Thomas' heart rate data shows just how nervous he was down the stretch at the Players.

Justin Thomas’ final round at TPC Sawgrass was a testament to stress management. The 14-time Tour winner faced test after test on the front nine while trying to stay in contention against one of the toughest fields in golf.

Finally, on the ninth hole, Thomas broke through, sinking a key putt for eagle and the lead. How nervy was that putt? According to Thomas’ Whoop data, his heart was racing the entire time and spiked as he celebrated with an emphatic swing of his putter.

Looking at this graph it becomes evident just how important Thomas’ pre-shot routine is. As he went through his putting routine and set up for his shot, you can see his heart rate drop slightly. Being nervous over the ball is never a good thing, so Thomas used his routine to settle himself down before making his stroke.

Just because he’s a pro doesn’t mean Thomas wasn’t feeling stress at this moment though. The slight uptick in his heart rate coincides with him standing over his putt and making his stroke. The sharp increase is indicative of the excitement and celebration that ensued as his putt dropped into the bottom of the cup for eagle and the lead.

A similar pattern occurred on the 18th hole as Thomas tried to close out his win.

You can see from the graph that Thomas’ heart rate was moderately high at 134 bpm when he arrived on the 18th tee. The nerve-wracking 17th hole at Sawgrass can have that effect on you as can the adrenaline of being on the edge of a huge win. What’s interesting here though is that again, Thomas’ heart rate stays somewhat stable, even dropping slightly, as he went through his pre-shot routine.

Again, just because Thomas is a pro doesn’t mean he doesn’t get stressed on the course, especially as he watched his drive on 18 flirt precariously with the water along the left side of the fairway. You can see Thomas’ heart rate drop slightly the moment he realized his ball stayed dry off the 18th tee.

The takeaway here isn’t just that Tour pros are good at managing nerves. For every amateur golfer, the true takeaway is how crucial having a good pre-shot routine can be, even more so when you’re faced with high-pressure situations.

While you’ll probably never be putting to win a record $2.7 million dollars, you still need to be able to get comfortable in uncomfortable situations on the course. A good pre-shot routine can help you do just that and will likely help you shoot lower scores too.

5 ways to get rid of the shanks, according to Top 100 Teachers