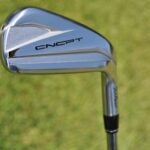 As the father to one of the greatest golfers on the planet, Mike Thomas doesn’t have to worry about gear. No, he doesn’t get freebies because Justin Thomas is on staff with Titleist. As one of the game’s top instructors — and the second set of eyes for JT’s swing — the elder Thomas already has a direct line to Titleist as a PGA Professional ambassador for the brand. Titleist is in the family’s gear DNA.

Just like his son, Mike Thomas also sported a full bag of Titleist gear during their win at the PNC Championship. Most of his setup is fairly accessible to the average consumer: TSi3 woods, U510 utility irons, Vokey SM8 wedges and Pro V1x ball. Standard stuff — until you get to the irons.

Justin Thomas owns a sterling professional resume, but pops has him beat in the iron department. With a $500 per club price tag, Mike’s CNCPT CP-03 irons go for more than double what you’d pay for a set of JT’s 620 MB blades on the open market. Not only that, the CP-03 is a special-order product, meaning you can’t just waltz into your local golf store and pick up a set.

If you’ve never heard of CNCPT before, it’s better known as Titleist’s concept car line, whereby designers were given an almost unlimited budget and blank slate to create the best products they could come up with. What initially started with the C16 driver has since expanded into the iron space to include a full line of CNCPT iron products, including the recently released CP-03.

The CP-03 is classified as a “progressive midsize muscleback” and sports a shape that’s similar to the popular T100 irons. The genesis behind the iron is to blend distance, forgiveness and control through the combination of a “Super Metal L-Face” insert that’s almost six times stronger than carbon steel. The metal is stretched to thin out the face structure in an effort to increase ball speed.

Throw in 100 grams of tungsten, on average, in each head, and you have a scary recipe for distance and forgiveness in a relatively compact head shape.

As for why the elder Thomas is using the irons, it’s for the same reason recreational golfers on the older end of the spectrum would consider them: The thin face makes up for the pop you’ve likely lost without having to go to up in head size to gain a bit more speed — and forgiveness. In Mike’s case, it’s a combo that allows him to keep up with JT when they’re not teaming up to win father-son titles.

It’s an iron recipe amateur golfers could benefit from as well.