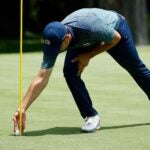 Odds are that most of us have never made an ace or jarred an approach shot, but for some pros those magic moments are remarkably familiar.

What do hole-out odds have in common with earthquakes and the number of lifetime sexual partners of the average Swede? Read on for the punch line.

At last year’s U.S. Open, at Torrey Pines, Louis Oosthuizen needed to hole a 69-yard shot from the fairway to force a playoff with Jon Rahm. What were his odds, I wondered? The history of professional golf is peppered with famous hole-outs. Larry Mize holed out from 45 yards to win the 1986 Masters. Four years later, Robert Gamez jarred a 7-iron from 176 yards to capture the Arnold Palmer Invitational. To Greg Norman, who was victimized by both of those shots, hole-outs must have seemed remarkably common. But just how likely are they from the fairway or from the tee of a par 3?

To arrive at an answer, I looked at more than 15 million shots of 20 to 260 yards in the PGA Tour’s ShotLink database. Not surprisingly, the odds of a hole-out get longer with the distance of the shot. It’s how those odds change that I found interesting. From 25 yards in the fairway, the odds of a pro holing out are about 100 to 1. From 50 yards, the odds swell to about 300 to 1. From 100 yards, the odds are closer to 900 to 1. (Of course, other factors affect the odds, but these are averages across all holes and conditions.)

See the pattern? Double the distance and the hole-out odds triple. That relationship is called a power law because the effect on odds is the distance effect (doubling) raised exponentially.

A simple example is the area of a square. Double the edge length and the area increases by 4 (2 raised to the power of 2). Another power law is the volume of a cube. Double the edge length and the volume increases by a factor of 8 (2 raised to the power of 3). Both area and volume follow power laws, but each has a different power. The ShotLink data allowed me to estimate the “power” in the hole-out odds power law. It makes it easy to see that the odds of a pro holing out from 200 yards are about 2,700 to 1. (The law breaks down as you start getting into very large distances, where hole outs become pretty much impossible.)

Power laws apply across a range of fields, from finance and economics to biology and seismology. The odds of an earthquake in a given region over a specific time period follows a power law. If a region experiences 100 magnitude 3.0 or larger quakes in a year, it will average 10 magnitude 4.0 or larger quakes and one magnitude 5.0 or larger quake. In this way, scientists use smaller quakes to estimate the odds of a “big one.” A study of behavior in Sweden showed that the number of lifetime sexual partners followed a power law, where 10 percent of men had 25 (or more) lifetime sexual partners and 1 percent had 100. The data fit a power law quite well, with 0.1 percent of men having 400 lifetime partners. Seems Wilt Chamberlain wasn’t the only one.

But let’s get back to golf. As part of my research, I also thought it would be fun to come up with a PGA Tour ranking for hole-outs. To do so, I couldn’t just tally the number of hole-outs each player had made, since not all hole-outs are created equal. Instead, I used a system that awarded points according to the odds of the shot, so that a hole-out from 25 yards (100-to-1 odds) was worth 100 points, while a hole-out from 100 yards (at 900-to-1 odds) was worth 900 points and so on. (See chart above.)

In case you’re wondering, the longest hole-out on Tour is credited to Aaron Baddeley, who knocked down a shot from 336 yards in 2015. That lightning strike earned him 8,490 points in my ranking but still didn’t get him into the top 10. Oosthuizen isn’t in the top 10, either. His odds of jarring that shot at Torrey a few months ago were about 500 to 1. A similar power law holds for weekend golfers. Just take the pro odds and multiply by 5 — meaning that you or I would have had a 1-in-2,500 chance if we’d been standing in Louis’ shoes.

Bottom line: If you’re hoping for more hole-outs, you’ll need to get lucky, or play a lot more golf!