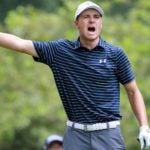 With bulked-up Bryson DeChambeau capturing the attention of the golf world, players are getting peppered with questions about his game, and what they would do in order to achieve similar results. Jordan Spieth, for his part, thinks Bryson is an “extremely talented” player, but doesn’t envy his distance. Asked if he would pursue a similar transformation, he pushed back:

“If I swung that fast right now, I would probably be injured.”

Spieth’s game clearly isn’t at the level it was during his near-Grand Slam run of 2015, but some subtle golf swing changes and a hot putter have given fans hope that the future ahead of him is bright. But ask Spieth himself what he believes is the missing link in his own game, and it has nothing to do with driving distance. He wants the opposite:

“In an ideal world I’d hit 10 percent more fairways and that’s all I’d care about.”

“I’ve been in the top 10, 15 in total driving or strokes gained driving. I think my rookie year was maybe the only year I was in the top 20, and I hit it a lot shorter. I hit it a decent amount shorter than I did now, I just hit a lot more fairways. I think on a week-to-week basis, it’s a huge, huge advantage, but in the biggest events, it’s about golfing your ball, a combination of obviously having enough distance to have short clubs into greens, but most importantly hitting fairways.“

So forget distance, Spieth says. Give me 10 percent more fairways, and I’m good. It’s a slightly unusual mindset in the modern, distance-obsessed era, but the stats do suggest it could help.

During his rookie year in 2013, Spieth ranked 18th in Driving Accuracy, hitting 67 percent of his fairways. During his record-setting 2015, he ranked 80th, finding the short grass over 62 percent of the time. The three-time major champ currently ranks 219th in Driving Accuracy, hitting just a hair over 50 percent of his fairways, so an extra 10 percent or so would vault him back to a similar level where he was at his peak. It makes sense why Spieth would consider that the missing link in his fame. Whether he can find it and get back to his best remains to be seen.