Playing the Olympic Club is both a U.S. Open history lesson and humbling test 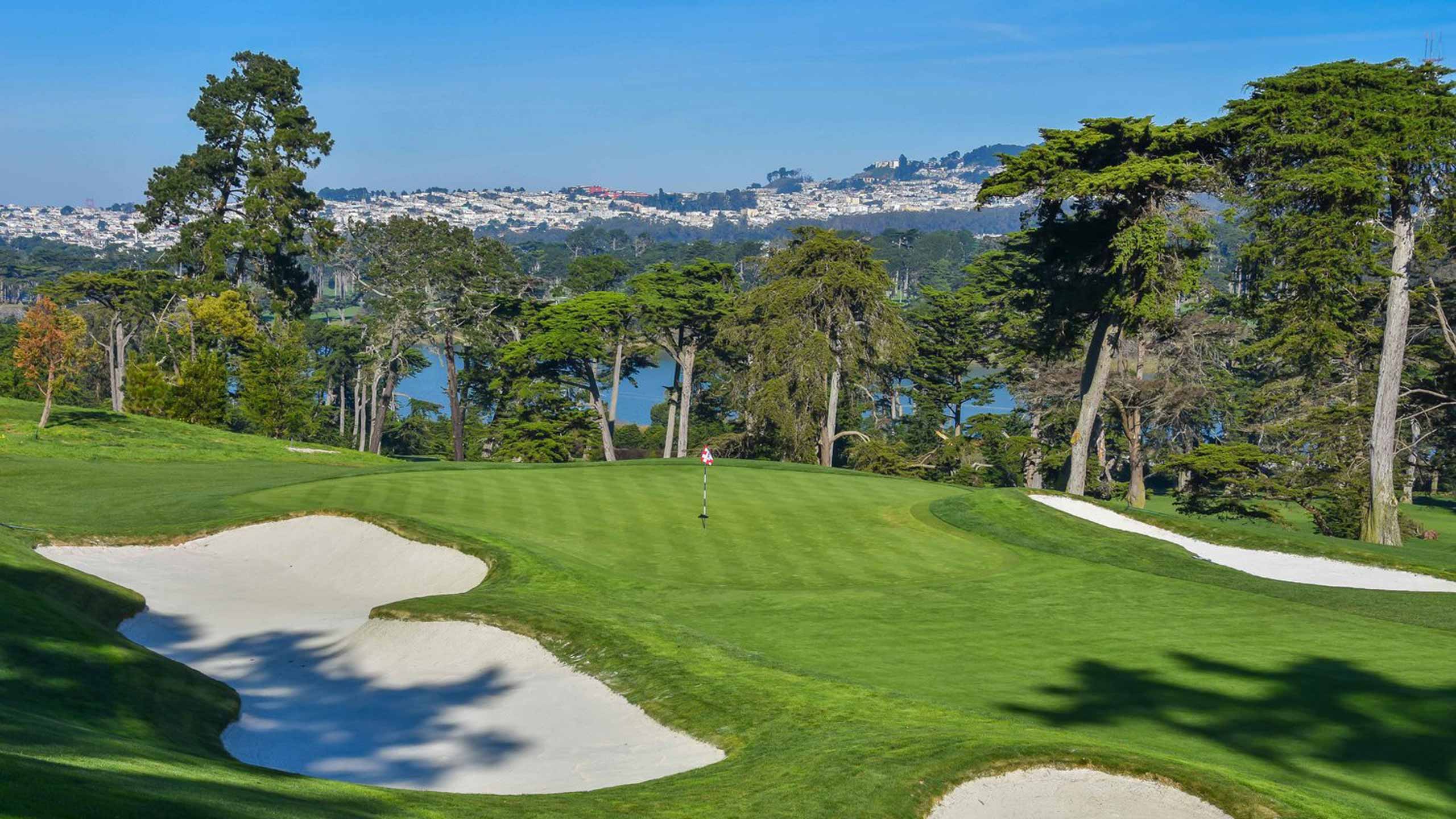 The Olympic Club has emerged as one of the game's most storied venues.

Ed. note: The 2020 U.S. Open, now set for Sept. 17-20 at Winged Foot Golf Club, was originally slated for June 18-21. In a cap tip to the week that would have been, GOLF.com has been highlighting our national championship, from its history, courses and legacy to its special ties to Father’s Day. In this three-part series, GOLF staffers tee it up at famous U.S. Open courses and break down their history, allure and winners, and explain why these venues matter so much to the greater golfing good. Also see: What it’s like to play Bethpage Black and What we learned playing Wisconsin’s two U.S. Open courses.

What you need to know about Olympic Club’s golfing pedigree

The oldest athletic club in the United States, it was founded in 1860, in San Francisco, and built an early reputation for fielding elite amateur teams in football, basketball and rugby, among other sports.

Golf didn’t come until the fold until 1918, when the downtown-based club assumed control of the Lakeside Golf Club, on the western fringes of the city. Six years later, following the acquisition of additional land, that single course was expanded into two 18-hole layouts, the Lake Course and the Ocean Course.

To say the rest is history leaves a whole lot out.

In the near-century since, the Olympic Club has emerged as one of golf’s most storied venues, having staged two Tour Championships, three U.S. Amateurs, the U.S. Junior Amateur and the U.S. Amateur Four-Ball.

In the summer of 2021, the Olympic Club will welcome its first U.S. Women’s Open.

In the Olympic Club’s grand clubhouse, display cases brim with championship silver, sepia-toned still shots and other tournament memorabilia. On a wall just off the dining room, a written account of the club’s five U.S. Opens hangs below the headline, “Graveyard of Champions.”

Point being: While the winners of those tournaments were all worthy, they’re nowhere near as well known as the runners-up.

The register of famous second fiddles starts in 1955, when Jack Fleck, a little-known municipal course pro from Iowa, foiled Ben Hogan’s quest for a fifth U.S. Open title. With a final-round 70, Hogan appeared to be a shoo-in, so much so that Gene Sarazen, working as a commentator for NBC, congratulated him on his win. Not so fast. Playing behind Hogan, Fleck birdied two of his final four holes to force an 18-hole playoff, which he won by three the following day. Hogan was just one back on the final tee, but he hooked his drive into rough so tangled that it took him three shots to get back in the fairway. A black-and-white photo of Hogan trying to hack out of that trouble is part of U.S. Open iconography.

In 1966, the next time the U.S. Open took place on the Lake Course, Johnny Miller, then a 19-year-old amateur, finished T-8. But the bigger story that week involved Arnold Palmer, who played a painful role in one of the most shocking turnabouts in major championship history. Leading by seven with nine holes to play, Palmer staggered through that stretch in four-over par, allowing a hot-putting Billy Casper to catch him. Like Hogan before him, Palmer went down in a playoff the next day.

We could go on, but we’ll do so briefly.

In 1987, Tom Watson fell on Sunday to Scott Simpson by one, while in 1998, Payne Stewart closed with a star-crossed 74 (a pivotal moment came when Stewart’s tee shot on the par-4 12th hole settled in a sand-filled divot in the fairway, leading to a frustrating bogey), giving way to Lee Janzen’s second U.S. Open win.

Janzen shot a steely 68 that day, but he also had a bit of memorable fortune in his favor. On the 5th hole, his drive nested in a cypress tree and appeared doomed to stay there. But no. The ball dropped to safety just as Janzen had begun his march back to the tee box to reload.

In 2012, two past U.S. Open champions, Jim Furyk and Graeme McDowell, played in the final pairing on Sunday. But both came undone down the stretch, low-lighted by an instance on the par-5 16th tee, where Furyk smother-hooked a 3-wood into a dead zone in the bushes (just as Arnold Palmer had done on the same hole in the midst of his 1966 collapse).

The come-from-behind winner was Webb Simpson, who deserved the spotlight but wound up sharing it during a surreal trophy presentation, when a man in a colorful outfit who was later dubbed the Bird Man photo-bombed the proceedings, cawing for the cameras before being whisked off by security.

“Yeah, enjoy the jail cell, pal,” Simpson said, unfazed in his enjoyment of his victory.

Can you get a tee time at the Olympic Club?

The Olympic Club is private, and while it’s not the city’s most exclusive course (that honor goes to nearby San Francisco Golf Club), it can be difficult to access if you don’t belong. The problem isn’t stuffiness. It’s supply and demand; with a large membership and limited guest tee times on the Lake Course, there just aren’t many slots to go around.

If you know a member, your best bet is to make yourself available on a weekday afternoon. Be flexible, and your member friend will find a way to get you on.

Meantime, you might ask that same friend to take you on the Ocean Course, the Lake’s less famous but more player-friendly sibling. Or the Cliffs Course, a superb 9-hole par-3 course that overlooks the ocean. You would not be alone if you walked away convinced that the shortest course at the Olympic Club is the most entertaining of the three.

Like a lot of championship layouts from the Golden Age, the Lake Course is hard but not find-your-ball hard. You can easily bogey all 18 without ever having to reload. The opening hole, which tips out at just more than 500 yards, played as a par-4 in the 2012 U.S. Open. But it’s a par-5 throughout the year, so you get a little breather right out of the gate, which is nice, since there’s not a lot of let up after that.

Descriptions of the Lake Course’s defining traits invariably include mention of holes that dogleg one way but cant the other. That’s true of the par-4 4th, which bends left but tilts right. It’s also true of the par-4 5th, which shapes the other way around. The lay of the land on both leaves you with lilts and lies ill-suited to the shots you want to hit. And they aren’t the only ones.

In recent years, many trees have been removed or have died natural deaths (including the tree where Janzen’s ball nested). But the course still plays through stands of towering cypress and eucalyptus that find all kinds of ways to thwart you. The greens are small and well defended. A number of holes dogleg defiantly. Missing the fairway rarely comes recommended anywhere. But at the Lake Course, driving is especially important, even though there’s only one fairway bunker on the course. Fail to find the short grass and you’re in a dogfight to save par.

What else you need to know

—Though they don’t like to talk about signature holes here, members often speak of signature looks. The right side of the opening hole is one of them. It runs along a high point of the course, and from it, views give way to the ocean and the bay, with the Golden Gate Bridge glinting in the distance. To your right lies Lake Merced, and spreading on the other side of it, TPC Harding Park, a municipal course that will host the PGA Championship in August.

—After the opening hole, you don’t see another par-5 until the 16th. As you walk from the 15th green, keep an eye out for a small, overgrown tee box. It was used in the 2012 U.S. Open to stretch the hole to 671 yards, the longest hole in championship history.

—Birdie-binges are uncommon at the Olympic Club. But feasting is encouraged. Alongside the 10th green is a shack that serves one of golf’s most celebrated dishes: the burger dog, which, as the name suggests, is a hamburger served on a hot dog bun. In short, it’s nothing fancy, but it’s also singular; try to recreate it on your backyard grill, and it just won’t taste the same. Ask for it with all the fixings. Depending on how well you know your host, you might want to ask for two.