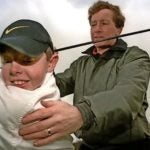 Rory McIlroy has worked with Michael Bannon for over two decades.

Michael Bannon insists that he got more than a little bit lucky. How was it that he, a Northern Irish golf pro, happened to live down the street from the most talented young golfer anyone could remember?

On this week’s Drop Zone podcast, Bannon — so often the man behind the curtain — joined me to break down what it was like to help raise a future world No. 1 golfer.

“He got good parents, and his parents were great,” Bannon said. “They brought him up well, gave him the confidence and you know, not to talk about myself, but maybe I was the right person in the right place at the time. I was lucky, too. And it’s just a combination. I don’t really know.”

It’s an unanswerable question, of course. How do you measure luck versus talent versus hard work? Bannon acknowledged that it’s an impossible recipe to recreate, of course. Not every child can go on to greatness. But Bannon did get a sense of what worked for young McIlroy. In particular, he stressed that Rory spent much of his time as a youngster getting out and playing as opposed to merely sitting on the range. And he was complimentary of one particular strategy from Gerry McIlroy, Rory’s father, that every parent could try with their juniors:

“One of the smart things his dad did was which was very good and a lot of junior parents should do, is his dad adjusted the pars on the golf course,” he said.

“So if it was a par-4, I mean, Rory was small. He reckoned, ‘Okay, the par is really 6 or 7 for that hole. So he would write that on a card. You know, this is not in competition golf. This is just in casual golf when Rory would go out and play.

“So the first could have been a par-6 or 7. Then the next might have been a 6, and he’d do nine holes. And Rory could go ’round the course under par.”

McIlroy himself recalled the strategy fondly to TaylorMade last year. “Instead of being a par-4 it would be a par-10. And if I made a 9 or an 8, that was a birdie or an eagle, and I felt really good about myself and that made me want to keep coming back.”

“It was really a smart thing because it gave him the confidence thinking, ‘Yes, great, I was under par today,” Bannon said. “Under par from the course that his dad had set up for him. So that’s a good thing … not to be afraid to be under par.”

If it worked for McIlroy, it’s worth a try with your junior, too. In some ways it resembles the strategy Earl Woods employed with Tiger, insisting that he play from the forward tees to get comfortable breaking par.

It was a joy speaking with Bannon. We covered a wide range of topics, from what McIlroy was like as a kid (“it would’ve done your heart good to watch him”) to the style of Earl Woods (“he was very knowledgeable and knew exactly what he was doing”) to McIlroy’s emotional charge at Portrush (“I just think the whole thing just hit them on the tee”). We also discussed his new show on GolfPass, “Breaking into the Game: Juniors with Michael Bannon, which you can check out here.

For all the good stuff from the interview (plus Bannon’s accent, which can’t be replicated by reading) listen to this week’s Drop Zone below or anywhere you find podcasts:

I gained 23 yards of distance off the tee — all without even changing my swing. Here's how