Do you play with a chip on your shoulder? Pro says when that won’t work. 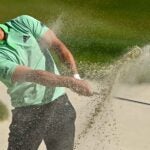 Xander Schauffele hits a shot out of the sand during this week's CJ Cup.

Xander Schauffele, in his press conference ahead of this week’s CJ Cup, said he was “never sort of this winning kid” and that he “never really had like an easy time running through tournaments.” It was vintage Schauffele. He wears his chip on his shoulder with pride.

You can’t argue with the results, either. Four PGA Tour wins, including the 2017 Tour Championship. An Olympic gold medal. A Ryder Cup team, with a Ryder Cup celebration that led his wife to say “she hasn’t seen me this bad since college.”

But that creates a problem, doesn’t it? What happens when the underdog becomes the top dog? When you are the “winning kid” and you do have “an easy time running through tournaments?” What happens when all of the love that comes with success has chipped away at that chip on your shoulder? In his rise from also-ran, Schauffele said he’s “evolving slowly.”

“I think that I’ve — I’m trying to still figure out what would be the best for me,” Schauffele said. “I’ve done a little bit more reading. I’ve talked to — not to anyone specifically, but I’ve spoke about the matter a bit with my team.

“It’s interesting when you look for help, you always find what worked for someone else and those are the only examples they can give, and when I give advice, it’s sort of what I’ve experienced. So for me to really just be very critical and honest to myself when I do have those personal conversations with myself, whether it’s in the mirror or a dark room, those are sort of those key moments for me. And I feel like being super transparent in those moments has sort of shed some light on the important things and the things that I do well.

“So I’ll sit there — the Olympics, for example, I feel like I was aware that I could win a gold medal and I was aware of how much it would mean to everyone. I told myself, wow, if I’m able to do this, I will have a gold medal around my neck. I let my brain go to that point, and then I reeled myself back in quickly.

“So in the past I used to try and bury things and try and not think of them. So in that instance, whether it’s me reading something in a book or something, it’s allowing myself to get to that future point where people try to get you away from; I let myself get there, and I try to use enough triggers to get me back to reality so I can compete.”

In his introspection, Schauffele admitted too that there are times where that chip-on-your-shoulder mentality may actually be counterproductive.

“I’m very competitive; I hate losing,” he said. “I think everyone out here hates losing. I think I’ll always have a chip on my shoulder just sort of the way I was brought up and sort of raised, but there are times where if you have a three- or four-shot lead or a six-shot because you’re playing so well and you’ve worked on your game so much, having a chip on your shoulder, who are you going to swing at when you have a six-shot lead? Everyone’s behind you.

“So you do have to adapt, and I think adaptability is something that’s really key out here if you want to succeed at sort of every level.”

And succeed he now has. To even the point where one of the players who was getting all the attention all those years has even noticed.

“Yeah, Xander’s one of my favorites; he’s awesome,” said Jordan Spieth, who’s just three months older than Schauffele. “Gotten to know him a lot more over the last, I’d say, two years than before that. I mean, he was our age growing up, but we weren’t very close, so it’s been really fun getting to know him.

“I think Phil [Mickelson] said it, that he might be one of the most underrated players on the PGA Tour even though he’s obviously had great success, and I would have to very much agree with that. He’s a top-10 putter, he strikes the ball beautifully, drives it really well, has speed, kind of has all the shots.”