Whatever Xander Schauffele does in his career, he’ll never have another win like this 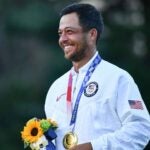 No matter what happens in Xander Schauffele's career, he will never have another win like this one.

I woke up Sunday morning to genuine golfing news, the kind we don’t often get, and read one story in particular with a racing heart: Sean Zak’s GOLF.com report, datelined Kawagoe, Japan, a mystery running through it, lede to kicker: would Stefan Schauffele, get to see his son Xander’s march to an Olympic podium? Stefan was a would-be Olympian hopeful himself (a German decathlete in 1988) until fate (a drunk driver in his lane) crashed in. Xander’s maternal grandparents live in Japan. Holy confluence, Batman.

(It could be noted, in this era of Bryson and Dustin and Jon Rahm, that Xander looks more like Robin.)

Rory Sabbatini of Slovakia (yes, still: huh?), took the silver medal, at the 2020/’21 Olympics, which concluded on Sunday in Japan.

There was a seven-for-one playoff for the bronze, won by C.T. Pan of Taiwan, beside his wife and caddie, Yingchun Lin, who goes by Michelle. She was wearing a visor with a visor about twice as wide and long as your standard-issue Ian Poulter visor. You see these extra-long, extra-wide visors all over at the public courses of southern California, and all across Asia.

I recall seeing this charming couple huddled in a parking lot at Liberty National in Jersey City, N.J., a few years ago, clubs in the trunk. They were far from home, navigating the world and charting a path to Newark International. The underside of the sparkly life.

But this golfing Sunday belonged, ultimately, to Xander Schauffele of San Diego, Las Vegas and Parts Unknown. He was playing in the day’s final grouping with Paul Casey and the man who outplayed Schauffele to win the Masters in April, and in that man’s country. Hideki, of course. Japan. They were playing for the gold.

For about 40 years now, when I go to type g-o-l-d and often get, on my first stab, g-o-l-f. Well, this time it was right. Xander Schauffele won the golf, and the golf won him. I don’t even know what that means, but it’s a thing, I’m sure of that.

Xander had what the golfing mystic Michael Murphy, among others, would call a peak performance, golfing division. When everything in your life — physical and mental, internal and external — comes together. You are in a state of controlled ecstasy. There’s something mystical about it. You’re in the zone, but the zone does not lend itself to words or pictures.

A quick real-world detour to Sabbatini of South Florida, with his South African accent, muddled by his many years in Dallas. He’s Slovakian because he married a woman from Slovakia and that was his path to dual citizenship. Yes, it’s weird. The Olympics are loaded with the weird, the bureaucratic, the technical. Maybe Tiger will pursue Thai citizenship for the 2024 Games, in Paris.

Regarding the seven-for-one playoff: It’s rare, but not that rare. You’ll see mass playoffs often enough at USGA qualifiers and at Monday qualifiers for every tour. You might be tempted to say that the stakes, Sunday at the Kasumigaseki Country Club, were higher, because a bronze medal was at stake for this gang of seven, and because another Rory (McIlroy) and reigning British Open champion (Collin Morikawa) were in the group. The stakes might have been higher to you, watching. For them, playing. But if you’re the golfer trying to play your way into the U.S. Open, well, at that moment, there’s nothing more important in all the world.

Regarding Xander and his peak experience: He was playing for himself. His country. His father’s dashed dreams. His maternal grandparents. The only way he could get it done was to absorb all that, and let all that go.

Xander has an interesting face. In it, you can see the world, or parts of it. We’ve been seeing a lot of it. He’s played in 18 Grand Slam events and has had top-10 finishes in half of them. Phil Mickelson was touting Jon Rahm when you thought he was a character’s name in a Stallone movie. Well, Mickelson has been talking about Xander for years.

I like Xander. But that was crazy talk, when the dust was settling on Masters Sunday, and he said he hit into the lake on 16, the par-3, because he misread the wind. “I hit a perfect shot,” he told Amanda Balionis, of the 8-iron he hit there, on a hole that measured 184 yards. He made 6. Nope, not a perfect shot. Not even close. Not a read-the-wind problem. Just, to borrow from Tom Watson, when he lost to Seve at that ‘84 Open at St. Andrews, describing his second shot on 17, the Road Hole: wrong shot, wrong time, wrong club.

It happens. It’s golf. Golf’s hard. Well, Xander said then he’d be OK. He’s OK. He could have gone in a hole, after that Masters. He most certainly did not.

Have you ever seen a golfer standing with a bouquet of flowers before? I have not. Stefan Schauffele, in the end, could see it: his son, the Olympian, on a golf course in Japan, with a sunflower and other flowers in his right hand and a gold medal in his left.

Xander, in victory, was, essentially, speechless. He could see his father. His father could see him. He knew his mother, his bride, his grandparents and people were watching. Everything that was really happening to him, and had happened, was so internal words cannot get there. But he had those flowers. The flowers and the medal. One of them is forever, not that anything really is.