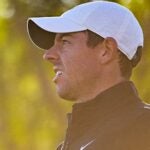 Rory McIlroy has thought a lot about his recent on-course struggles ahead of his season debut at this week's CJ Cup.

It’s not easy being Rory McIlroy. Not unlike Tiger Woods, McIlroy has lived his life under the spotlight since grade school. By the age of 25, he was a four-time major champion and on top of the golf world.

But the phenom from Northern Ireland hasn’t captured a major win since 2014. Now 32, McIlroy has fallen to No. 14 in the world ranking, a precipitous decline from his most recent stint at No. 1 in the summer of 2020.

The dip has coincided with major positive changes in his off-course life. He married Erica Stoll in 2017, and the pair welcomed their first child, Poppy, in September of last year. This led critics to speculate whether McIlroy’s happy private life had taken a toll on his golf game, most notably Hall of Famer Tom Weiskopf, who questioned his “determination” in December of last year.

“I don’t see any frustration,” Weiskopf told Golfweek‘s Adam Schupak in a Q&A. “Life is good, and it should be — he’s a multi-millionaire and has a kid now — but I don’t see the Tiger attitude. It’s like he’s satisfied all the time.”

The merits of criticizing someone for being satisfied with their personal life is a topic for another column, but McIlroy quickly refuted Weiskopf’s comments.

Just how much McIlroy cares was on full display at this year’s Ryder Cup during an emotional interview following his Sunday singles match, where he fought through tears and explained his disappointment in not doing enough to help his team win.

That brings us to this week’s CJ Cup, where McIlroy participated in a pre-tournament press conference before his season debut. As always, Rory was thoughtful and honest, but when asked about whether his tearful Ryder Cup interview and on-course struggles were a result of being too hard on himself, McIlroy responded in the negative: “No. If anything, I think it’s probably the other way around.”

He then offered up a surprising reevaluation of his on-course motivation, revealing that he now thinks he’s not quite hard enough on himself, especially when things go awry on the course, and that he may sometimes use his satisfaction with his off-course life to dismiss poor play.

“I think sometimes I give myself too easy of a time and I try to play it off with, you know, golf doesn’t define me and I’ve got balance in my life and I’m happy away from the course, and that’s obviously very true,” McIlroy said. “But if I’m honest, sometimes I sort of maybe use that as a way to lessen the blow if I don’t play good golf. So, yeah, it’s probably the other way around.”

We’ll get our first chance to see if this newfound perspective will help McIlroy get back to the top of the game in 2022 when he begins his new season on Thursday afternoon in Las Vegas.