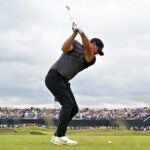 For all the Open Championship Sunday buzz around Collin Morikawa’s poise, Jordan Spieth’s near-miss and Louis Oosthuizien’s latest heartbreaker, it was easy to overlook the fact that Brooks Koepka recorded yet another top-10 finish in a major. If you’re keeping score at home, that’s 12 top-10s for Koepka in his last 16 major starts, a staggering 75% hit rate. (For context, King Louie — a major savant in his own right — has “only” six top-10s in his last 16 major appearances.)

These days, perhaps the only thing less surprising than Koepka finishing near the top of a major leaderboard is his reaction to not closing the deal. The man has set impossibly high standards for himself.

“Doesn’t really matter what I finished today,” Koepka said Sunday afternoon after torching the already crispy Royal St. George’s with a three-birdie-one-eagle 65 that would ultimately land him in a tie for 6th. “I didn’t have a chance to win. That’s disappointing.”

With disappointment in golf comes diagnosis, and Koepka was quick to identify what most prevented him from prevailing: his iron play, in particular his iron play in the third round when he made four bogeys en route to a two-over 72, his worst score of the week by three strokes. “I was pulling shots with my irons just making poor swings,” he said.

Here’s the thing with Koepka, though: While he may overthink his beef with Bryson, the same can never be said of his swing. This is a guy who has said his “mind goes blank” when he’s standing over his driver. Same goes with Koepka’s iron play: he keeps it blessedly simple.

“It’s never really swing mechanics,” he said Sunday. “It’s always setup. So I got lined up a little right and usually when I do that, believe it or not, I tend to pull it knowing that the target is left.”

Koepka said that through the first three rounds he also struggled to get the ball to the hole on the slowish Royal St. George’s greens — a mistake he was committed to not repeating on Sunday. “I told myself no matter what I was going to get it to the hole,” he said. “Didn’t care if I three-putted, but the ball was going to get to the hole.”

Align your feet at your target and get your putts to the hole: two sensible tips golfers of all abilities can and should apply.

As for the Open vibe last week, Koepka was all about it, especially the fans.

“I’ve always said that it’s the one tournament a year where the fans actually know what a good shot is,” he said. “You could be 200 yards out and hit it 30 feet and they know there is a slope there you can’t miss it. Let’s say it’s left and you got to hit it 30 feet to the right and they know that’s where you’re aiming — they understand a good golf shot and they understand a good round.”