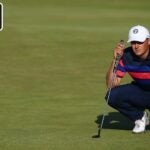 Jordan Spieth drew notice on social media on Sunday when he showed up to Royal St. George’s for the final round with his putter in hand. After the ugly three-putt he closed with on Saturday, it made sense that he wanted to get in some extra reps with his wand before the last 18.

The three-time major winner’s final-round charge ultimately came up short, but a cold flatstick is hardly to blame. Spieth finished the final round with 27 putts on his way to posting a 66 and taking runner-up honors. After the round, he explained why he showed up to the course with his putter in hand.

“Michael [Greller] took the bag, and I wanted to hit some putts on a putting rail that you can’t use on the greens here because you need flat surface,” Spieth said. “He went to the course early, and I just wanted to hit a few putts before on the putting rail before I came over.”

A putting rail is a common training aid that helps players work on the correct stroke arc. And, as Spieth showed, it can even be used while you’re at home.

“I needed to put in a little bit of work trying to almost get a solid couple hundred to 500 putts in between yesterday’s finish to today’s round to think that I could go out and confidently go stroke enough to win,” he said.

Spieth came up a couple holed putts short of major No. 4, but not for lack of practice.

Anne van Dam is one of the longest hitters on the LPGA Tour, but far too often her putter lets her down. This week, she decided to try something different. Per Golfweek’s Beth Ann Nichols, van Dam recently opted to try putting with her eyes closed.

“At one point it just gets really mental,” she said. “If you can’t see what you’re doing, you just trust your inner instincts.”

This is a move similar that a number of pros have used during their careers, such as Vijay Singh and Sergio Garcia, and has two main benefits. The first is that it helps players focus, as it doesn’t allow wandering eyes to distract them during the stroke. The other is that, as van Dam said, it frees players up and makes the entire process one of feel and instinct.

Collin Morikawa showcased tons of enviable skills during The Open, but among the most impressive was his poise during the final round. No matter how many times Jordan Spieth put pressure on the 24-year-old, Morikawa didn’t flinch.

While it appeared that Morikawa was calm as can be between the ropes, he explained after the round he was much more nervous on the inside. But he channeled those nerves into positive energy he used to capture the Claret Jug.

“You channel these nerves into excitement and energy,” he said. “And that puts you away from like a fear factor into this is something I want.”

That embrace of the nerves paid off, and Morikawa is the Champion Golfer of the Year.