This college golf coach has 6 players at the ANWA. He can help your game, too. 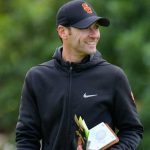 USC head coach Justin Silverstein has six players in the field at the ANWA.

AUGUSTA, Ga. — Ah, the Augusta National invite. Few feelings in golf are more exciting that learning you’ll be one of the lucky few who gets to play a course that most golfers only dream about.

For the University of Southern California women’s golf program, that excitement was multiplied by six. Yes, six.

For reference, the team normally brings only five players to a college tournament and of those five, only the four best scores count toward the team’s total.

With six girls from the program getting invited to play in the Augusta National Women’s Amateur, head coach Justin Silverstein and assistant coach Katie Woodruff have their hands full. It also means the USC coaches must be doing something right.

As his players took to the range for a final tune-up before the tournament gets underway on Wednesday, we asked Coach Silverstein what advice he has for the average golfer looking to improve.

1. Play games on the course

If you want to get better at golf, Silverstein says you need to play golf. Constant range sessions are only going to get you so far, so instead of practicing on the range, get out on the course and play different games. If you’re at a loss for what to do, you can take a page out of Rory McIlroy’s book and play a worst-ball format to get more practice with recovery shots and course management.

Silverstein stressed this type of practice is especially important for junior golfers. “You want to keep it fun,” he said. “You want young players to want to go to the course and play.” Whether you’re trying to improve your own game or you’ve got a talented junior on your hands, making practice more fun will help you want to practice more and help you improve faster.

2. Have a targeted approach

Silverstein doesn’t like to focus on outcomes. Instead, he prefers to think smaller when it comes to setting goals for his players. For example, rather than focusing on breaking 80, try focusing on rolling better putts or practicing different shots around the green more often.

Golf is made up of a million little things, from the way you grip the club to how much pressure you put on your front foot as you swing. Fine tuning a couple of these small but important things will yield big results.

The USC golf program has one of the most robust data analysis programs of any college golf team. Silverstein recommends average golfers measure everything using strokes gained. At the very least, he says this will help give you a realistic picture of your game and show you what you need to work on and where you have improved.

He also warns that too much data can bog you down. “In order to use the data correctly, you have to know yourself,” Silverstein said. He says that some of his players, like Allisen Corpuz, want to know everything about their games whereas giving others, like Alexa Melton, too much information can overwhelm them.

This may sound counterintuitive to a group of people looking for a quick fix, but Silverstein says, “If something works, don’t change it.” As average golfers, we all want to improve, but that doesn’t mean you need to completely overhaul your swing to do so. Coaching elite golfers at USC, Silverstein says his worst fear is changing one of his players’ swings unnecessarily.

This is where Silverstein’s earlier advice comes in. Knowing yourself and knowing your game can help you identify exactly what you need to improve on, and help you avoid the awkward fate of ruining a good thing.