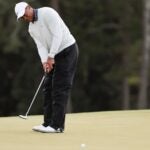 Tiger Woods during the chilly third round of the 2022 Masters.

During Saturday’s third-round coverage at the Masters, Tiger Woods had just left a putt short on 10 when CBS lead analyst Nick Faldo said: “There are so many things to calculate. The greens will be cold, the grass will be cold. I can promise you it makes a difference.”

It was a passing comment, but it echoed in the ether. The implication seemed to be that cool temperatures at Augusta National — it was in the high-30s at 7 a.m. that day with temperatures topping out at only 54 degrees in the early-evening — had made Woods’ putt roll slower. Among those who noticed was Graeme McDowell, who asked on Twitter: “Anyone buying this grass temperature theory from NF?”

There was nothing to slow the torrent of responses, as McDowell’s followers weighed in with a grab bag of opinions.

Here at Super Secrets, though, we don’t base our judgments on social-media speculation. We seek the insights of agronomic experts.

And, so, the question: Does turf temperature affect the pace of putting surfaces, and, if so, how?

Bob Ranum is a turf consultant and the former longtime superintendent at Atlantic Golf Club, on Long Island. He was at Augusta on Saturday. In his opinion, it was “a good day for green speed.” If anything, he noted, “When you have these low temperatures, the bent grass will slow its growth down and in turn the greens will typically speed up.”

Low temperatures, Ranum said, only slow down putting surfaces when combined with humidity; when the air gets sticky, greens can turn sticky, too.

But on Saturday at Augusta, the humidity was negligible, Ranum says. (If it you’re keeping score at home, it was 42 percent, according to the National Weather Service.)

Another educated opinion comes from Jeremy Hreben, superintendent at Indian Spring Country Club, in New Jersey, and president of the Golf Course Superintendents Association of New Jersey. Like Ranum, Hreben said that he couldn’t see how lower temperatures would slow down greens. On the flip side, he noted, when temperatures soar, turf sucks up more moisture from the soil, yielding firmer, drier conditions. In that respect, he said, he can see how higher temperatures would help yield faster, bouncier overall conditions.

But he said that he’d never come across any scientific studies on the link between temperature and green speed. That might be because they don’t seem to exist. Agronomic experts at the USGA, who study turf in granular detail, said they were unaware of any empirical data on the subject. Temperature and ball flight is another matter. It is well-established that colder air means shorter-flying shots.

“I’ve never seen temperature impact [it],” said Adam Moeller, agronomist and director, Green Section Education for the USGA. When it comes to green speed, he added, “the ball is impacted by the friction against the grass and gravity,” which in turn are a function of such factors as turf type and length, moisture levels, and the slope of the green itself.

So, there you have it, as close as we can come to a definitive answer.

In one respect, Faldo was right — putting brings a range of variables into play, especially on greens as complex as Augusta’s. But on Saturday at the Masters, temperature wasn’t likely one of them.