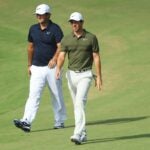 Patrick Reed and Rory McIlroy became entangled in controversy at Torrey Pines, but you can learn a lot from more than just the rules fiasco in San Diego.

Last week’s Farmers Insurance Open was eventful to say the least. The tournament opened with glorious weather and the stellar field shredding the North Course and obliterating par, while carnage arrived on Friday with wind, rain and hail battering the players.

Then came the Patrick Reed rules controversy on Saturday, which captivated the entire golf world. Eventually, on the heels of some super putting and nifty short-game skills, Reed broke away from the pack and cruised to a five-stroke victory and his 10th PGA Tour title.

As always there was many lessons to be learned from some of the Tour’s best.

What you can learn from Patrick Reed

In my opinion Reed has the best all-around short game in the business. This talent around the greens was on full display last week as Reed averaged 26.25 putts per round (tying a tournament record) en route to his 14-under par total.

Having called his play for a couple of rounds I can vouch for some incredible putting on what can be extremely challenging greens. I do however want to point out that all of his one-putts and greenside saves were largely the function of some pin-point chipping and pitching.

I have long been a proponent of getting good at “Shot No. 3,” as competence in this area will lead to many 3’s and 4’s and a lot of low scores. Reed is emblematic of this truth and there is something we can emulate in his greenside play.

Be creative with how you hold the club and how you address the ball around the greens. In short, do not be afraid to alter the length and lie of the club by where you hold it on the grip handle. Also, experiment with ball position, stance width and pressure placement between the feet.

Reed is super creative around the greens and it is unlikely you will see him play any two shots the same way. He will sometimes nestle into the ball, hold well down the grip, stand the shaft more upright and clip a pitch away with minimal wrist action. Other times you may see him hold near the top of the handle, flatten the shaft at address, widen his stance and pitch the ball with a more floating trajectory.

In other words, he hits a number of different shots as a product of altering pre-shot variables.

My lesson to you is to think wider than just opening and closing the face at address. Experiment with moving up and down the grip, moving the ball position forward and backward in the stance, widening and narrowing the stance and moving the distance of the ball closer and farther away from you. Doing this will create the palette for a plethora of different shots, a lot of fun around the greens, more saves and lower scores.

If nothing else, just toy with holding the club at different lengths and lies with different stance widths. Watch Reed the next time you see him play — he is very much like Seve Ballesteros.  Seve frequently employed a narrow stance and gripped down the club, and he was one of the best of all time.

What you can learn from Rory McIlroy

Entering the week, Rory McIlroy spoke of his home practice regimen and he mentioned that he oftentimes plays “worst ball” when out on the course. He grinned when he shared that if he could shoot under par playing “worst ball” he knew his game was in pretty good shape.

I contend that, at its essence, golf is a game of recovery. It’s all but a guarantee that your round will include a few periods of headwind and adversity. Even if you are playing well there are going to be times in the round that you will have to make a save or two to maintain momentum and salvage the score.

Playing a game like “worst ball” will get you into that grinding, focusing and game-management mindset.

Playing “worst ball” is straightforward. You basically play a two-ball scramble by yourself, but instead of selecting the best shot, you always select the worst of the two options. So, hit two shots each time, pick the worst one and proceed. It can be time consuming, but trust me, it will usher in a strong attitude, smart decision making, better shot selection and, most importantly, an approach based in a recovery mindset.