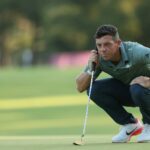 Rory McIlroy went back to a familiar putter at the Olympics.

Before last week, you had to go all the way back to 2016 to find a photo of Rory McIlroy wielding a Scotty Cameron putter. It was an eventful equipment year for the 32-year-old, who won the 2016 Tour Championship mere months after Nike announced it was exiting the hard-goods space. One of the more impactful changes McIlroy made at the outset of the FedEx Cup playoffs was the addition of a Cameron Concept M1 Prototype mallet that replaced his Nike Method Origin B2-01.

McIlroy’s latest decision to reinsert one of Cameron’s putters didn’t end with a celebration (or a medal), but it did leave him feeling hopeful about his putting. Mired in a slump on the greens, McIlroy put a 009 GSS Chromatic Bronze prototype in play at the Olympics.

If the putter has a familiar look, it’s because McIlroy used a similar Chromatic Bronze wand to win the 2011 U.S. Open and 2012 PGA Championship during one of the more dominant stretches of his professional career. The 009M — the “M” stands for masterful — has been in McIlroy’s possession since the 2016 PGA Championship — but last week marked the first time he’d ever used it in competition.

What’s interesting about McIlroy’s putter is it features a deep-milled face for feel purposes — a trait rarely seen on Cameron’s 009. In fact, McIlroy was one of the first players to use a deep-milled version of the 009.

“I think I sort of want to get back to being as athletic and instinctive as possible and I feel like that style of putter, that blade, it sort of helps me do that,” he said. “It makes me become very target-oriented, at the hole and having my focus be out there, instead of in here (looking down).”

While McIlroy failed to medal at the Olympics, he looked comfortable on the greens, finishing T4 before departing Tokyo. The four-time major winner is still under contract with TaylorMade, so this is certainly a story to track as he returns to the States and prepares to tee it up this week in Memphis at the WGC-FedEx St. Jude Invitational.

For Tour pros, managing spin throughout the bag is a surefire way to hit your carry numbers on a consistent basis. It seems fitting that the defining shot of Xander Schauffele’s week in Tokyo was a wedge shot from 98 yards that hit and spun back roughly 15 feet before settling 5 feet from the cup.

Accounting for the proper amount of spin is critically important, especially when you’re chasing a gold medal.

For Schauffele, he made the decision to switch balls earlier this year at the Memorial as his ball speeds started to increase. Schauffele went from the low 170 mph up to the low 180 mph range, which led his spin rates to creep up an additional 200-300 RPMs.

The ball helped Schauffele knock off the necessary spin (200 RPMs) across the bag and get back into his preferred spin window.

It was a memorable week for C.T. Pan in Tokyo. The Tour winner medaled in dramatic fashion, outlasting six other competitors in a sudden-death playoff to claim the bronze. Pan, along with silver medalist Rory Sabbatini, used a Scotty Cameron Phantom X 11.5 putter during the competition.

According to Cameron Tour rep Drew Page, Pan recently switched from a Phantom 12 to the Phantom 11.5 due to the smaller look and control it provided.

“Players keep talking about how well the 11 swings, and how well it sets up,” Page said. “When you put it down, it really sets up square, and that’s something a lot of players are looking for these days. You don’t want to be there looking down and second-guessing, is it open or closed? There’s no doubt with the 11. It just sits so perfect on the ground and is very stable throughout the entire stroke.”

“We sent C.T.’s set home for him to test and I got a text from him saying ‘Love the new irons!'” said Titleist Tour Rep Jim Curran. “He loved the way that new sole was going through the ground and just thought they felt great.”