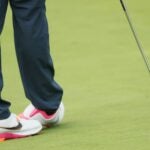 Rory McIlroy shot a two-under 69 in the first round of the Olympics.

Rory McIlroy has four major championships on his resume — a number nearly every pro on the planet would take in a heartbeat. But many contend the one club that’s continually held him back from winning more is the putter; it’s one of the reasons he hired high-profile teacher Phil Kenyon to help him get back on track.

McIlroy has successfully rotated TaylorMade putters since the instructor switch, but the latest change at the Olympics had gearheads going back in time to when the 32-year-old was on top with a set of Titleist sticks.

For at least one week, McIlroy is returning to a club that looks eerily similar to Newport 2 GSS he used to win the 2011 U.S. Open and 2012 PGA Championship — a Scotty Cameron 009M with a recognizable chromatic bronze finish on the head. (McIlroy’s old Newport had the same finish.)

Scant details are available regarding the putter, but it’s worth noting the single black “cherry bomb” in the cavity doesn’t match the original — neither does the Circle T stamp — meaning it’s likely a backup that was designed to specifically look like his previous gamer, all the way down to the “Rors” stamp on the toe.

At 340 grams (notice the stamping on the right bumper), the putter isn’t considered heavy by any stretch of the imagination. If anything, it’s ever-so-slightly on the lighter side in the weight department. The more traditional pistol-style grip is also a hint that Kenyon might be working on feel with McIlroy, who won five times on the PGA Tour (between 2011 and 2012) with a Cameron putter in tow.

McIlroy opened with two-under 69 at Kasumigaseki Country Club during the opening round of the Olympics.